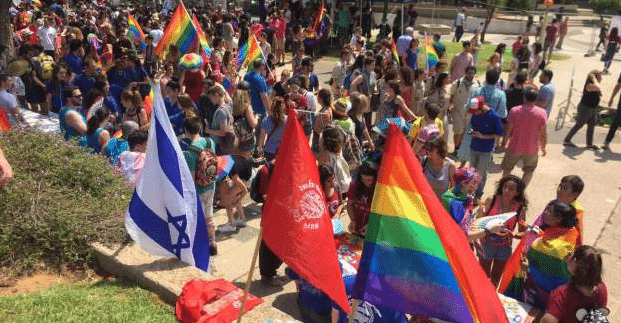 While Israel is no stranger to Gay Pride Parades and events, with eight cities including Tel Aviv holding annual events, Kfar Saba is new to the idea. That said, Kfar Saba has now joined the ranks of those other cities and held its first parade.

Over 2,000 citizens and guests got together to take part in the inaugural pride event earlier today. Those who actively participated in the march walked in a circular route that passed the main street of Weizmann without incident.

This successfully event was orchestrated by a group of LGBTQ youth after one of their transgender friends was attacked. They decided to create the event to show how supportive the community is of LGBTQ people.

18-year-old Noga Fishman, who was one of the organizers, told Ynet news, “The first Gay Pride Parade in Kfar Saba is the biggest thing I’ve ever worked on. I’m happy that I managed, along with my second family, to give pleasure to so many people and to make history.”

That said, the event did have a hitch in its planning thanks to the authorities.

Because of the fact that the parade would pass through main streets, the police asked the group to put up six and a half foot tall barricades. The group couldn’t afford to do so however, because they would cost NIS 24,000 (approximately, $6,747.46).

The organizers then petitioned the High Court with the argument that the financial burden of the barricades violated their freedom of expression and protest. In addition, they argued that it was the police’s job to protect and thus their financial burden to bare.

Two days after the petition was presented to the court, the police pulled back their demands and said they would handle the finances for protecting the march participants.

That’s eventually what they did as the inaugural march went on without any problems.