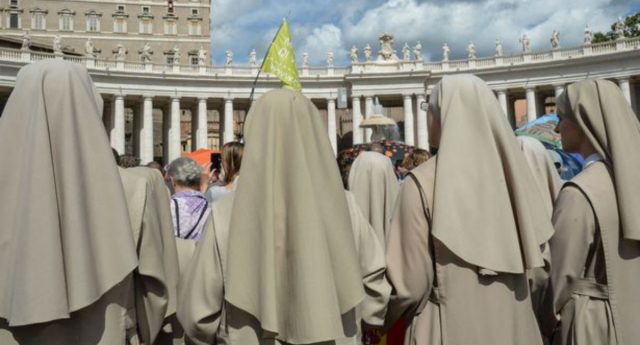 Two former Catholic nuns who renounced their vows after falling in love with each other have married. The pair tied the knot in Italy, following the country’s decision to pass a new civil union bill, which legalises same-sex unions .

Federica and Isabel fell in love three years during a mission in South America.

They belonged to the Franciscan order, which follows the disciplines of Saint Francis of Assisi.

However, they were forced to give up their place in the order after they fell in love, as the Catechism continues to teach that homosexuality is ‘disordered’.

“We call upon our church to welcome all people who love each other.”

The wedding took place in the northern town of Pinerolo yesterday, after the pair were forced to adjust their plans to protect their privacy.

They also received a religious blessing from ex-priest Franco Barbero, who left the church after he challenged its approach to the LGBT community

He described Federica and Isabel’s story as “like all the love stories in the world”. “They are two marvellous people, with very deep faith,” he added.

“They reflected for a long time and took the decision courageously, knowing it wouldn’t be accepted.”

Last week, the leader of the Catholic church praised anti-gay marriage activists in Mexico for ‘defending the family’.

In April the Pope also released a long-awaited report on ‘the family’, which affirmed existing church teachings opposing gay equality and same-sex marriage.

In the document, the he says that gay people should receive “assistance” to bring them back to normality, and affirms there are “absolutely no grounds” for considering recognition of “homosexual unions”.