Rainbow flags may fly at a new Chick-fil-A scheduled to open next month at a California airport.

Last year the council approved and announced a new contract with Host International Inc. that included the addition of a Chick-fil-A, The Mercury News reports.

“This is public space,” said Paul Escobar, president of Bay Area Municipal Elections Committee, a non-partisan LGBTQ political action group. “We know that this is a strong and inclusive community. We need to make sure that businesses there respect these values.” 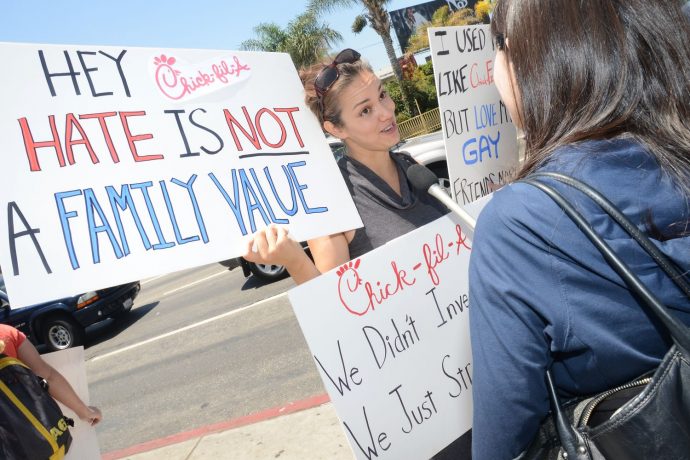 Santa Clara County supervisor and former city councilman Ken Yeager, the area’s first openly gay elected official, said he would like to see LGBTQ Pride flags installed near the location “as a counter-signal to the discrimination supported by Chick-fil-A,” assuring arriving travelers that the city welcomes everyone. “They’ll say, ’OK, San Jose is an inclusive city.’”

Councilman Raul Peralez endorsed Yeager’s flag proposal, adding that he will also advise the airport location’s management to hire LGBTQ employees so that it’s the “gayest Chick-fil-A in the country.”

The council voted not to further renew the Host contract unless Chick-fil-A agrees to operate seven days a week like the San Jose airport’s other eateries. The Christian-owned restaurant famously closes on Sundays.

According to the company’s most recent tax filings, Chick-fil-A gave $1.8 million in 2017 to three groups with anti-LGBTQ records, contradicting previous claims from execs that they would decrease problematic donations.

London’s Heathrow Airport Declares Its Love of the LGBT Community