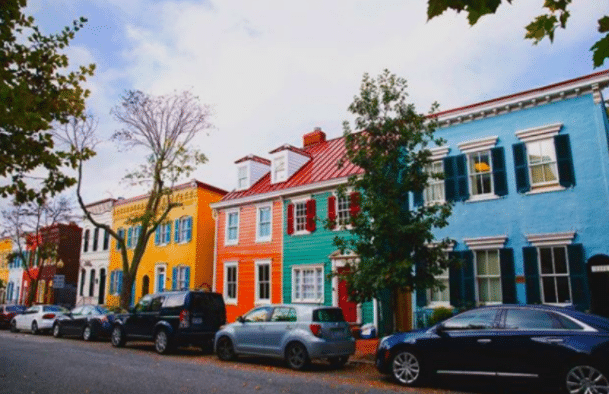 Georgetown University announced this week that it will offer LGBTI student housing.

The catholic university is in Washington D.C., capital city of the US.

The university’s Office of Residential Living has announced it accepted the proposal for a new Living Learning Community (LLC).

The new building will provide safe space for students to explore gender and sexuality.

Crossroads: Gender and Sexuality is the name of this new LLC.

It is intended to serve as a community space for conversations ‘about inclusivity issues pertaining to gender and sexual orientation.’

Jesuits founded the university 1789. They are members of the Society of Jesus. This is a scholarly religious congregation of the Catholic Church.

The Society of Jesus formed in sixteenth-century Spain.

Olson continued: ‘Our Catholic and Jesuit values call on us to engage with “respect, compassion, and sensitivity” with our LGBTQ community.

‘It is in keeping with our Catholic and Jesuit values to provide a language, perspective, and sense of inclusion for deepening our sense of cura personalis.’

The Office of Residential Living initially rejected the proposal in April 2017.

Associate Director of Residential Education Katie Heather confirmed the proposal had been accepted via email.

She contacted student Grace Smith, a leader of the LLC effort, to inform her the community would start in the 2018-2019 academic year.

Heather also explained the ‘logistics for this community are in the process of being finalized’ as well as the location, marketing and application process.

‘An assurance of safety and comfortability’

She leads the student government’s LGBTQ+ Inclusivity Policy Team. Smith described the decision as ‘a really big deal at a Jesuit University.’

The post continued: ‘This means that students will now begin to have a unique residential space dedicated to exploring and understanding themselves and others in relation to gender and sexuality.

‘Congratulations to everyone who made this dream a reality.’

Smith also spoke to the university’s newspaper about the new LLC.

She told The Hoya: ‘This is a major and unprecedented accomplishment for a Catholic university.

‘It makes a profound and radical statement that religion does not have to be mutually exclusive with the freedom to understand, challenge, and grow through and with expressions of and reflection on gender and sexuality.

Chad Gasman is the president of the university’s LGBTQ advocacy group GUPride.

He spoke about the importance of a safe housing space for queer students.

‘What this means for the LGBTQ campus community is, in so many words, an assurance of safety and comfortability.’