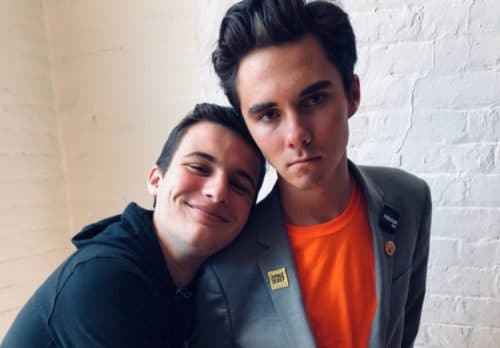 David Hogg And Cameron Kasky Continue To Swoon Us!

#CUTE! Ahh! Prom season is approaching. Arguably the best time of a Senior High School Student’s life. Whether you’re going with a friend or your special date, it’s a guaranteed good time. I don’t believe I’ve ever recalled someone telling me they had a horrible prom experience. While growing up LGBTQ, some of us may not have gone to prom for one reason or another. It’s likely we weren’t allowed to go with a person of the same-sex, which led to us not having a date, or in my instance, you graduated high school a semester early. I didn’t go to my prom and it’s honestly my only regret in life! Where’s one of those LGBTQ proms that Carrie Bradshaw went to in Sex and the City?! Well, two familiar faces in the Never Again movement are not going to have regrets about attending prom.

The most recognized, male face of the Parkland Students, David Hogg, is taking his fellow same-sex student, Cameron Kasky, to prom! Kasky took to Twitter to announce his prom date. While we’re led to believe this is strictly a platonic relationship, I cannot help but wonder. Kasky definitely seems like, ahem, family, as I’ve previously stated when he blasted the GOP for being more upset over gay wedding cakes compared to school shootings. Either way, I’m totally here to ship it. These boys and their fellow students have been through absolute hell. It’s refreshing to see them living their best lives.

Have the best night of your life, y’all! I cannot wait to see the change they continue to make as they step into college!