Home Gay Life Readers’ dilemma: Our relationship got violent, but my boyfriend won’t talk about... 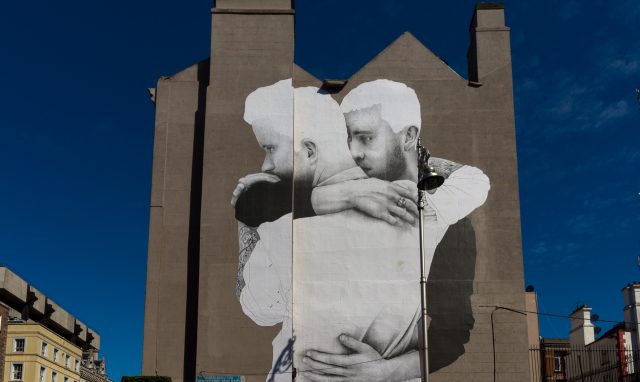 Me and my boyfriend had been arguing a lot about stupid stuff and recently one got very heated very quickly and resulted in him pushing me very hard.

I fell over and banged my head. He said sorry immediately and was very upset at what he had done, telling me over and over again he didn’t mean to and that he was truly sorry and it would never happen again. I accepted the apology and we didn’t argue for a bit. Now I want to talk more about what happened but he shuts me down saying he doesn’t want to talk about it because he is embarrassed and that he’s said he won’t do it again and that should be the end of it. I think being open about it would help, but when I say it, it only leads to more bickering. I am also worried if I keep pushing him about it arguments will start and they’ll escalate and he’ll do it again. Should I believe him? I don’t think it’s fair to pretend it never happened. Tom, by email

The Guyliner replies: When we argue, we are not ourselves. We are terrifying, passionate, selfish, obnoxious, belligerent versions of ourselves at times, of course, but we know we couldn’t behave like that all the time. Not only would nobody ever speak too us again, but we’d be exhausted – arguing can be cathartic but it saps your energy. Doing it regularly drains you and strains your relationships.

And yet we need to have them – we must argue, debate, discuss. Getting things out in the open is much better than letting them fester inside, fuelling resentment. And now this luxury has been taken away from you because last time you did, things got physical.

I’m sure you’ve sat yourself down to think and made excuses for him, tried to find a reason for what he did. “Well, at least he didn’t hit me,” you might think, or “He was very sorry afterward” but the thing is any physical contact during an argument, other than a conciliatory hug, is absolutely unacceptable. 100%. There are no grey areas or chinks of light through the blinds – no. And your boyfriend not only needs to accept that, he needs to hear it. He needs to know what he’s done, how it’s made you feel and how it has changed you. Because it has, perhaps irrevocably. You feel you can’t speak up. You now know what he’s capable of. You know just how far he’s prepared to go. He said he’ll never do it again, and he may be telling the truth, but you will never know. And neither will he.

Any physical contact during an argument, other than a conciliatory hug, is absolutely unacceptable.

So what do we do here? You need to say it and he needs to hear it but you both need to keep your hands off each other. The push has, in a way, forced your hand to really look at your relationship and the man you’re sharing your life with. Why were you arguing so much in the first place? Why did it get so heated? It sounds like it was all going wrong before the push, which has now derailed you both from working on your problems, because it has effectively shut down any further discussion.

It would be easy to tell you to leave – and I am very tempted to do just that – but it’s never that simple. I don’t know about your living situation but there could be economic factors keeping you together. Maybe he’s all you’ve got; it happens. What you need to do is realise your worth as a person, that you matter, that you have value, and you deserve to be heard. Your boyfriend can’t control you; he can’t tell you what to say or “That should be the end of it”. It isn’t the end of it, not ever, not really. Not talking about it merely makes it huger, a dark shadow forever looming – and you deserve light.

Tell him you need this, and so does he. Tell him you want to work things out, but you cannot go on as you are, and you will not. You need to speak up, you must be heard. If talking to him alone doesn’t fly, then demand couples’ counselling.

If he refuses, it is time to go. You could stay and say nothing and give him another chance, maybe keep quiet for a while and hope he doesn’t get the temptation to push you across the room again, but failing to make him face up to it is unhelpful for him and harmful to you, physically and mentally.

Communication is key in a relationship, especially one where rows are common. Some say that you have to work hard at a relationship, but that isn’t true at all. If it isn’t coming naturally, and he won’t do this for you, despite knowing what it means to you, then it isn’t real. Go get yourself something real. Be heard. You control the conversation – start talking. Now.

You can also find help and advice with Galop – The LGBT+ anti-violence charity galop.org.uk

I asked the great and the good on Twitter for their view. There are some interesting life experiences here.

@theguyliner @GayTimesMag I think it's time to call it quits. You can't be in a relationship with someone you're scared of.

@theguyliner @GayTimesMag either leave him immediately, or get to couples counselling ASAP on the basis that he's been the victim of DV.

@theguyliner A vital part of a relationship is communication. We all make stupid mistakes, but if you can't communicate about a moment …

@theguyliner … that could very well have been a one-off stupid mistake, then how can you communicate fully about anything?

@theguyliner It's not okay, but it's understandable. If he does it again, though, then ALL the alarms should be on maximum GET OUT NOW.

@theguyliner @GayTimesMag The boyfriend was the one at fault, he doesn't get to set the terms of how it's dealt with.

@theguyliner @GayTimesMag I think a get-away-from-me push is in a different category to a punch. He was appalled and ashamed that it >

@theguyliner resulted in an injury. Maybe they could write letters to each other. Then give him the benefit of the doubt, just this once.

@theguyliner @GayTimesMag I think if he's scared of his partner he probably suspects it wasn't 100% accidental and could happen again.

@theguyliner @GayTimesMag he wants to discuss it; his partner won't. His needs are not being met, even with risk of more harm. I'd end it.

@theguyliner Foundation for relationship is ability to talk about any & everything. Not here before the push, and less after. Big red flag.

@theguyliner @GayTimesMag alarm bells all over the place on this. Not just on the pushing, but the refusal to discuss, also tell writers

@theguyliner @GayTimesMag fear of escalating and it happening again. He's going to be walking on egg shells and not able to communicate

@theguyliner @GayTimesMag get out now. This is how domestic violence begins.

@theguyliner @GayTimesMag Get out now while you still can. If he is genuinely remorseful he has the choice to treat his next partner better

@theguyliner @GayTimesMag if he's done it once, chances are he'll do it again. If you're worried he will then you need to leave.

@theguyliner @GayTimesMag Refusal to discuss = dealbreaker. Maybe give it a few more days, but if bf still won't talk, Get Rid.

@theguyliner @GayTimesMag think they need to evaluate why they were arguing so much first otherwise they may end up in the same position!