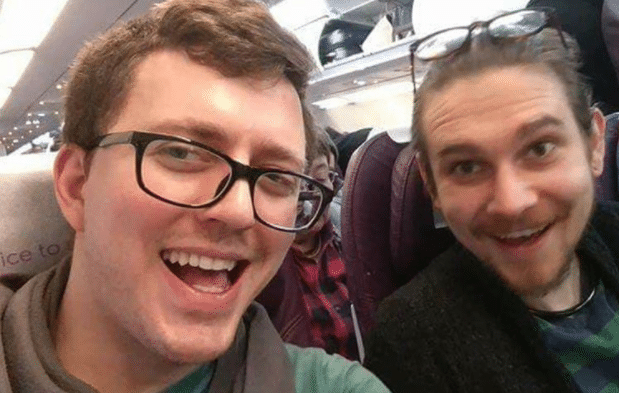 Two men from Iceland have been left upset and demanding answers after being escorted from a US plane before departure.

Hafsteinn Himinljómi Regínuson is better known in Iceland as his drag persona, Ragna Rök. He was traveling in the US over the holidays with his US-born boyfriend, James McDaniel.

The couple were booked on a Southwest Airlines flight from Baltimore to Alabama on 22 December. They were heading there to spend time with McDaniel’s family over the holidays.

The two had travelled to the US with no problems via WOW air.

However, their travel plans were thrown into disarray on the second leg of their journey when police boarded the Southwest plane as it waited to depart Baltimore. They demanded the men get off the flight.

McDaniel, 31, who now lives in Iceland, wrote a lengthy Facebook post giving his side of the story.

‘We boarded our flight to Atlanta on time and were getting cozy, glad to be on the last leg of our trip. My older brother and mom were at the airport in Atlanta to meet us and I was so excited to be back in the states to see my family, especially since I have not seen my father or younger brother in two years.

‘Then, while we were sitting in our seats on the plane three police officers came onto the plane and told the two of us we had to leave immediately. They wouldn’t tell us why. Then they started saying Haffi had thrown stuff at the flight attendants.

‘We tried to ask them what they were talking about as it seemed they must have got us mixed up with someone else. They said if we didn’t leave they would take Haffi away in handcuffs.

‘It was unclear why they were targeting him and not me. It is still unclear why. They took us off the plane. Haffi started to cry, holding his hands up to his face. They told me that if he didn’t calm down he would be arrested.

‘Somehow, my survival instincts kicked in and I was able to talk them down and get the two of us out of the airport without him being taken away.’

Forced to take an 18-hour train journey instead

McDaniel says he was told that he could take the flight, but without Haffi. However, there was no way he was going to leave his partner behind in an unfamiliar, foreign city.

‘It took us a long time to find a bus, not having wifi or cellphone service, to a hotel that had a room available.

‘I just feel so ashamed that this is my boyfriend’s first experience in the USA.’

Unable to board their flight, the two eventually made an 18-hour train journey from Washington DC to Alabama instead.

McDaniel told GayIceland that he thinks his and Haffi’s sexuality played a part in their removal.

‘The main difference between us and other passengers was that we were openly gay. Not in an over the top or publically disrespectful way, but in a way that we are used to living in a free country like Iceland.

‘We hold hands when we walk together. We might take a brief kiss now and then. And on the flight, Haffi has a tendency to curl against my shoulder and nap. All things which, of course are normal between a healthy loving adult couple, no matter what part of the sexual spectrum they are, whether straight or gay.

‘When we asked the police officers for a reason they said Haffi threw something at a flight attendant.’

‘We definitely deny throwing things at a flight attendant,’ he told GSN.

McDaniel says he has since contacted Southwest via social media to ask why they were told to leave the plane.

The message he got in return said, ‘Southwest may refuse to transport, or remove from the aircraft at any point, any passenger for the comfort and safety of another customer or crew member. This applies to any passenger whose conduct is, appears, or has been known to be disorderly, abusive, uncooperative, offensive, threatening, intimidating or violent.’

The messages do not elaborate on the specific reasons the men were asked to depart the aircraft and suggests McDaniel write to Southwest’s customer relations team for further investigations. He has done this but says he has yet to hear back.

‘It felt like being forced back into the closet’

‘It’s just unfortunate that this was Haffi’s first experience in my homeland. It felt like being forced back into the closet.’

They are now back home in Iceland, where McDaniels gained citizenship late last year.

‘I’ve only been an Icelandic citizen for two months, but the freedom and safety I feel in Iceland, let’s just say I won’t ever take it for granted again after this experience.’

Haffi posted his own message to Facebook about the experience.

‘They never gave us a clear answer on what we did that made sense to our experience. And we do wonder, given the political and social climate, if it was homophobia. And indeed, can only remember breaking those “social norms”.

‘We don’t know what happened. So we can only wonder.’

McDaniel told GSN, ‘The point of us talking to the media was never for attention or pity, but as a warning, in hope that this doesn’t happen to anyone else. Or at least if you go to the US, to be cautious or at least known what you are getting into.

‘This is the first time I dared not hide my sexuality as I traveled home. And now I’m realizing that it was a mistake to think we would be safe.’

Asked the extent to which they were being ‘openly gay’, he told GSN, ‘Nothing that would be offensive or rude.

‘Holding hands and some hugging before we got on the plane. Holding hands while getting to the seat. A kiss or two when seated. Excited to be on the last leg of the trip, but also tired, Haffi leaning into my neck when seated, but more to fall asleep.’

Southwest, headquartered in Dallas, Texas, scored the top mark of 100 on the HRC 2018 Corporate Equality Index. The index assigns scores to Fortune 1000 companies based on their LGBT-friendly policies and procedures.

Around an hour after this story was published, Southwest responded to GSN to say it took the customer’s allegations very seriously and had carried out an internal investigation into the incident.

A spokesperson told GSN: ‘While we don’t normally discuss individual customer situations, we believe it is important to share what occurred to dispel the accusations made toward Southwest.

‘According to our internal reports, Flight Attendants working the flight, along with some customers onboard the aircraft, expressed concerns about one customer’s unruly behavior prior to departure.

‘Our Ground Operations Employees followed guidelines and requested the Customer exit the aircraft due to behavior that demonstrated signs of intoxication, which continued once off the aircraft. As a precaution, law enforcement was called to the gate while our Employees were speaking with the Customer.

‘As a note, the United States Federal Aviation Administration (FAA) has regulations that prevent any U.S. airline from transporting a customer who appears to be intoxicated.

‘As a goodwill gesture, we offered to rebook the Customer and his travel companion on a flight the following day, but they chose not to take the flight. We’ve also refunded the cost of their tickets.

‘Finally, we have no reports indicating this event involved any type of discrimination. Southwest Airlines is proud to support diversity in all forms as demonstrated among our 55,000+ employees and the more than 110 million Customers that choose to fly us each year.’

McDaniel responded to Southwest’s statement to tell GSN, ‘We had a couple of beers in Baltimore with dinner during our layover, but nothing extreme.’

‘They never made accusations of intoxication on the plane or off. The tickets were booked by a family member.

‘They offered to rebook the next day, but we felt so humiliated and distrustful that we didn’t feel safe flying with them. As for the refund, this is news to me, but I have contacted the family member to see if we can confirm that. As far as my last conversation with them went there was never an offer of a refund.

‘I’m glad they are finally saying something, but am disappointed that it feels like they are blaming us.

‘I honestly wish we had the foresight to have recorded the incident.

‘Currently, we are getting in touch with legal representation for guidance.’

GSN has reached out to Maryland Transportation Authority (MDTA) Police for further comment.