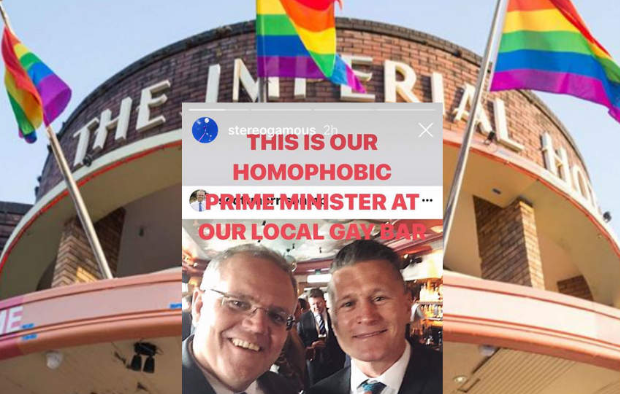 The venue has rejected the accusations, but LGBTI local artists are calling to boycott it

A popular Sydney LGBTI venue has been accused of removing all their rainbow flags for a private event attended by PM Scott Morrison.

Concerns have been raised by Sydney band Stereogamous, who posted a Facebook story today (23 October) addressing last month’s incident at The Imperial Hotel.

On 25 September, Scott Morrison took a selfie with boxer Danny Green at the venue. The bar is a favorite for the LGBTI community, having hosted several drag events among others.

Scott Morrison is Australia’s sixth Prime Minister in 11 years. He is a Pentecostal Christian and therefore voted against same-sex marriage during the country’s debate in 2017.

Shortly afterward, DJ and musician Niveen Hoe, took a screenshot of it and uploaded it to her Facebook account. She asked ‘punters, artists and promoters’ to boycott the iconic venue.

‘If you knew that Sydney’s most iconic LGBTQIA venue invited Scott Morrison in for a function, but removed gay flags and adornments in order to make this racist homophobe more comfortable, what would you do?’ she asks.

She furthermore added: ‘Personally, I won’t be working there anymore. At the risk of cutting off the hand that feeds me, I’m going to say NO to The Imperial Hotel. And to punters, artists and promoters, there are other venues such as The Bearded Tit and The Red Rattler who deserve our work and love far more.’

The Sydney venue rejected the accusations

‘Any accusation The Imperial Hotel, Erskineville recently removed our LGBTQI+ flags is simply NOT true,’ they wrote.

‘We will always proudly fly our rainbow colours in respect for our LGBTQI+ family, as we continue to support our community as we have done for The ‘YES’ Campaign, NAIDOC Week, Miss First Nation or special events that embody queer culture. In fact we recently installed a permanent custom-made framed rainbow flag into the wall above our front doors.’

However, regulars were not satisfied with the explanations. The venue, in fact, failed to address whether they actually removed the flags for the PM’s visit.

Moreover, they welcomed a politician with anti-LGBTI views in a queer space, a Facebook user pointed out.

‘You still let a man in who should never be allowed anywhere near a safer space or lgbt+ venue like what you are supposed to be.’

GSN has reached out to The Imperial Hotel for further comment.