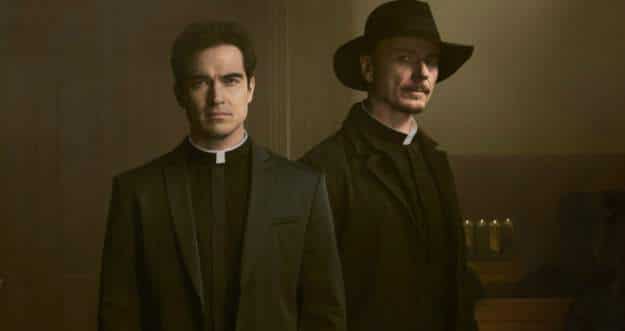 Jeremy Slater is the showrunner for the tv show The Exorcist and he’s not a fan of homophobes.

Some viewers were upset when there was a gay kiss between the former priest Marcus Keane (played by Ben Daniels) and Peter Morrow (Christopher Cousins).

The Fox horror drama strongly hinted at the sexuality Daniels’s character since the first season of the show. Then this recent episode in season 2 confirmed it.

But, of course, some fans can’t accept that and took to the internet to share their distaste of the scene.

That didn’t faze Jeremy Slater however. In fact, he almost thought nothing of it, but did take the time to defend LGBTQ characters through his interview with Sci-Fi Bulletin.

“I don’t think there was that much of a backlash,” he said. “I saw a couple of homophobes on Twitter and my response is, ’Good, fuck you. I’m glad you didn’t like it, I’m glad it ruined the show for you. You shouldn’t have good things in your life.’”

“If a homophobe can’t watch the show anymore because one of the characters is gay, then I’m glad something good has come out of it,” Slater continued. “This is 2017 and we still have people throwing temper tantrums online because they don’t want to see gay characters. I think it’s the last gasp of a certain breed of dinosaur that’s on the way out, and let them kick and scream as they go.”

Interested in checking out the show now? You can watch it on Fox on Friday nights.