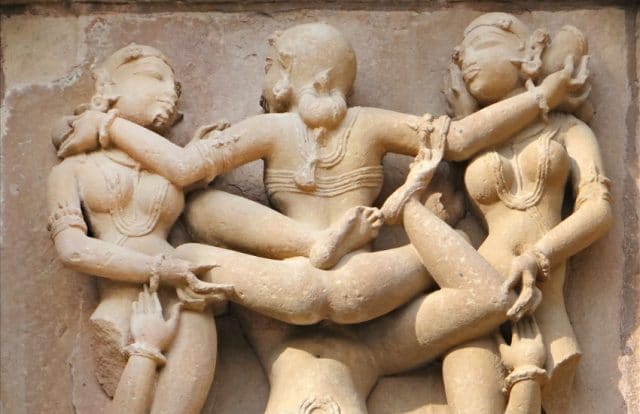 Hinduism dates back over 3,500 years ago, but with it, comes some fairly astounding ideas about gender and sexuality (such as women procreating boneless children together, but more on that later).

Amara Das Wilhelm is the president of the Gay and Lesbian Vaishnava Association (GALVA-108), the first LGBTI Hindu religious organization.

He told Gay Star News: ‘Hinduism traditionally recognizes LGBTI persons as a natural third gender – people with mixed male and female qualities – and their presence was considered an important part of any festival.’

He added: ‘This customary understanding was somewhat lost under Islamic and British rule but can still be seen to a large extent.’ 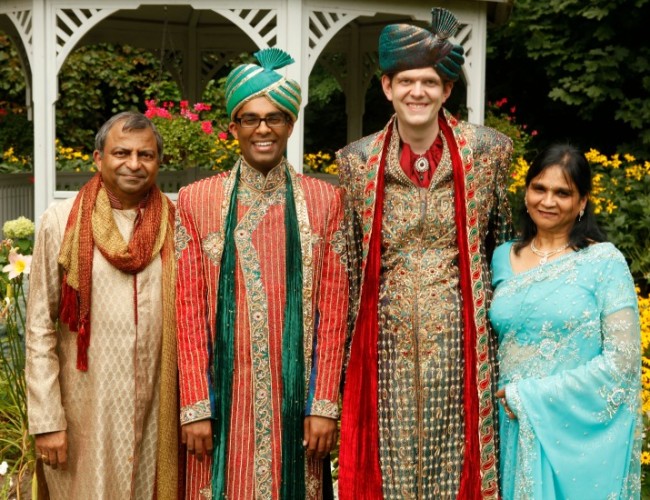 In fact, there are even several Hindu temples with carvings that depict both men and women engaging in homosexual sex.
Wilheim created GALVA-108 ‘to remind Hindus of this inclusive heritage.’

Blurring the lines of gender

In ancient Hindu mythology, Subala, who is male, dresses in female attire. He swaps clothes with Radharani, a milkmaid and the lover of the god Krishna. Radharani meanwhile dresses in Subala’s male attire. Their likeness is so similar that they could not be told apart.

Wilhelm added: ‘In Vrndavana, India, temples still dress Radharani in male attire on this day and it is one of the rare opportunities to view Her lotus feet and receive special blessings.’

There is also the story of Shikhandi, featured in the sacred Mahābhārata. This is one of the two major epics of ancient India, written in the Sanskrit language.

Shikhandi was born a woman (with the name Shikhandini) but was raised as a man. He was then arranged to marry a woman.

But when she found out he was actually a girl, she insulted him and he fled. He then met a yaksha (spirit) who agreed to exchange his gender.

Shikhandini then returned as a man with the name ‘Shikhandi’ and led a happy married life with his wife and children.

There are also many androgynous and intersex themes in Hindu mythology.

Gods sometimes changed sex and non-divine beings underwent sex-changes through the actions of the gods. This could’ve been as a result of curses or blessings, or as the natural outcome of reincarnation. 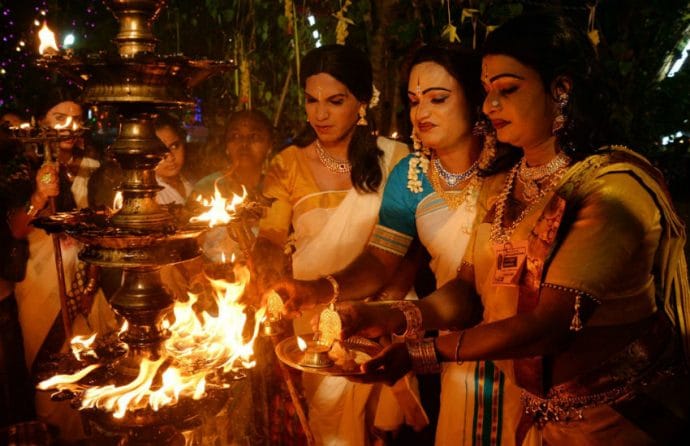 Hijra are still blurring gender lines in India today. If you were to translate the word hijra into English, you may call them transgender. But actually, it’s a far more complicated social and cultural identity than just that.

While they are shunned in some circumstances, they are also important to Indian cultural life. No Hindu wedding is blessed if hijra don’t attend it. And increasingly they are getting protection and are starting to get access to better jobs.

Hijras are officially recognized as third gender by some governments in Southeast Asia. They can be transgender, intersex or eunuchs.

In 2014, India’s High Court ruled transgender individuals should be able to declare themselves to be third gender.

Transgender people can now register official documents as the third gender, with all the rights associated with it. Hijra laws also exist in Bangladesh and Nepal. And some countries recognize them by offering ‘gender x’ passports.

And it states if two women have sex and one becomes pregnant, the child will be born without bones. This is because they believed a father provides bones and mothers provide flesh and blood.
When asked about homosexuality, Sri Sri Ravi Shankar, founder of the international Art of Living movement, said: ‘Every individual has both male and female in them. Sometimes one dominates, sometimes other; it is all fluid.’ 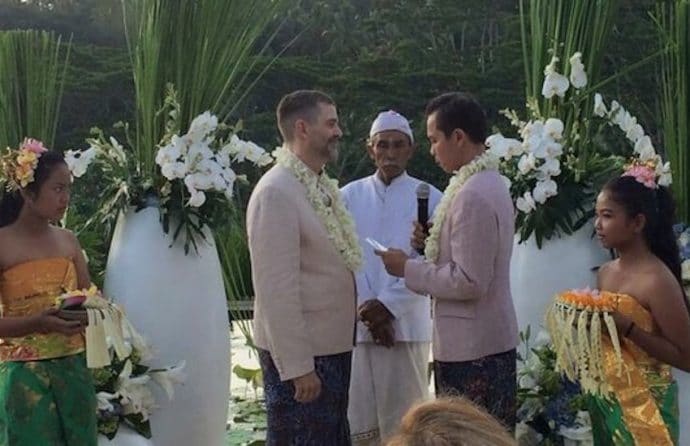 Similarly, Srinivasa Raghavachariar, head priest of the Srirangam temple, has a romantic interpretation of homosexuality.

Indian philosophy teaches that after we die we are re-born. Our purpose on earth should be to avoid this reincarnation, by living a perfect life we can escape to ‘nirvana’ or heaven.

So Raghavachariar believed same-sex partners must have been cross-sex partners in a former life – reunited by reincarnation.
He said the gender may change, ‘but the soul retains its attachments; hence love impels them toward one another.’

‘The spirit is not male or female’

Some experts even interpret Hinduism as supporting same-sex marriage.

The priest said that having studied Hindu scriptures, he concluded: ‘Marriage is a union of spirits. And the spirit is not male or female.’ 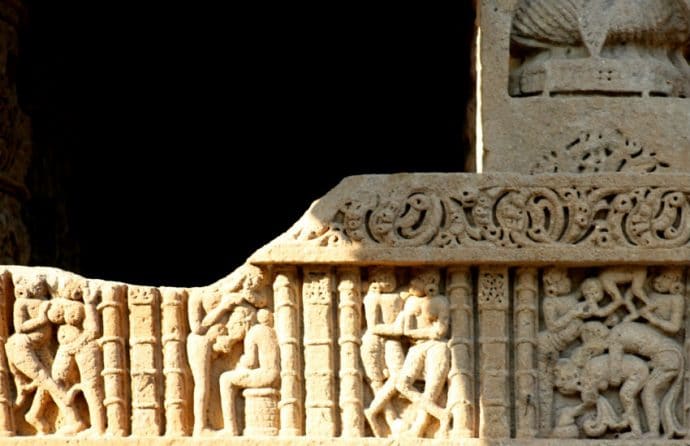 Hindu mythology is also rich in homosexuality. One example is the great king Bhagiratha. He is famous in Indian myth for bringing the country’s great Ganges river to earth from the heavens. And he is thought to have been born out of copulation between two queens.

There’s a similar story about Karttikeya – the Hindu god of war. He was born when Lord Agni, the god of fire took semen from one of the principal deities Lord Shiva.

But homosexual sex is not entirely embraced. In all aspects of Hindu life, celibacy is important… unless for procreation.
Wilhelm told GSN: ‘Celibacy is a rather important principle in Hinduism, not just for gays but for everyone if possible.

‘I have been celibate most of my life with the exception of a few years of exploring my sexuality.’

Diwali: The festival of light

Diwali is the most famous Hindu festival. It celebrates the victory of light over darkness, good over evil, knowledge over ignorance, and hope over despair. And it’s celebrated with lights and fireworks.

It all happens during the holy month of Kartik or Kartika.
Wilhelm said: ‘In regard to the month of Kartika and Diwali, LGBTI people will be interested to know that when Lord Rama [a god called the ‘Supreme Being’] was exiled from Ayodhya. People of the third gender patiently held a vigil for him outside the city during His entire exile.

‘The Lord was thus especially pleased with them and offered His blessings.’

Diwali is a time when devotees of Rama ‘thus offer lamps as a means to guide the Lord home upon His return.’ 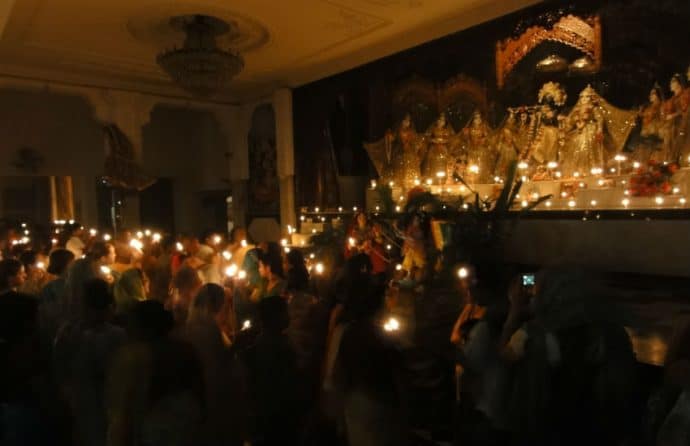 It’s also the Hindu New Year and Kali Puja, a day when the powerful goddess of the Lord’s material energy is worshiped. Thus Diwali is celebrated variously within all of the many expressions of Hinduism.

Diwali’s date varies with the moon but is usually some point between mid-October through mid-November.
Kartika is not only one of the main holiday seasons in Hinduism and anticipated by all.

Hindu scriptures say the good results of devotion to God are multiplied when you do those good deeds during this holy month.
Kartika is of course equally observed by all Hindus regardless of gender, race, nationality, sexual orientation or any other external consideration. 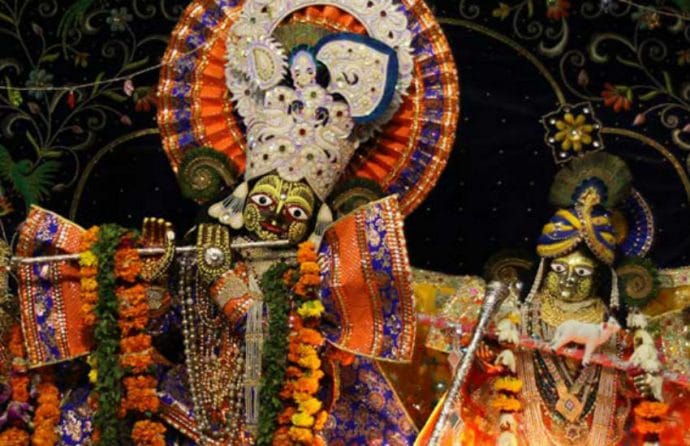 It is a time to nourish one’s soul and make rapid advancement in spiritual life.

Wilhelm said: ‘In regard to the appearance of Kartikeya [the god of war], he was born from two male gods (Siva and Agni). He is worshiped by the third gender as an eternal bachelor along with his male companion, Visakha.

‘Kartikeya’s appearance is celebrated on the full-moon day and last night of Kartika.

‘Diwali and the many special days of Kartika are celebrated each year at your local Hindu and Hare Krishna temples. Please feel welcome to stop by, join in and receive all the many blessings available.’

And he added the Hindu blessing: ‘Hare Krishna!’

‘Hare’ is an address to God’s energy and ‘Krishna’ is a God.