Home Gay Life This gay couple is getting married on a Sydney Gay and Lesbian... 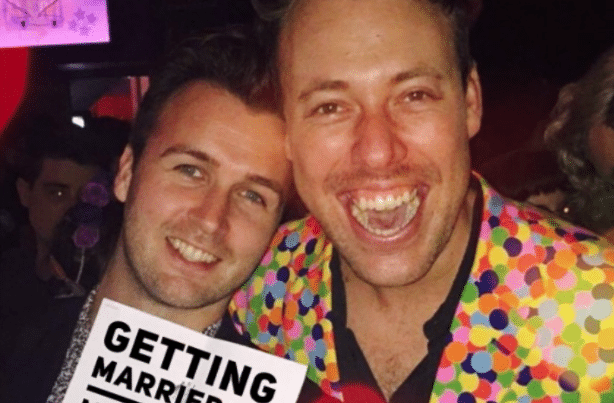 Since marriage equality became legal in Australia last week, same-sex couples have been lining up to register their intention to marry.

But one couple has decided to do things a little bit differently, by getting hitched on top of a float at world famous Sydney Gay and Lesbian Mardi Gras Parade in 2018. Sydney’s Mardi Gras is one of the world’s biggest LGBTI festival and attracts hundreds of thousands of people to the city every year.

Australia’s parliament legalized same-sex marriage on Thursday after a long postal survey which asked Australians whether they agreed the law should be changed to allow same-sex couples to marry.

When the postal survey results showing most Australians agreed with same-sex marriage were announced on 15 November, James ‘Breko’ Brechney and his fiance Stuart Henshall made international news when Breko proposed at Sydney’s results announcement event.

‘I knew the results day would be a magical day in Sydney with many of our friends and my parents joining us,’ Breko told Gay Star News.

‘It’s only been something we had been talking about recently but I thought “bugger it”, and surprised Stu with the proposal.

‘I’m very lucky he said yes. How embarrassing if all of Australia had said yes and Stu didn’t.’

But now they’re making headlines all over again with their unique wedding idea.

‘I throw a float every year (last year we did the George Michael float) so I spoke to Mardi Gras last week about changing our theme after consulting with my crew when we had the idea to tie the knot on Oxford St,’ Breko told Gay Star News.

‘So we’re thrilled it’s happening – and it’s our float with our closest 80 friends and family so we get to have creative control.’

Big news! We've set a date – Saturday 3 March 2018!! We're going to say 'I Do' as we cross over the site of the rainbow crossing at Taylor Square on our Mardi Gras Float!!! ??❤️#fullcircle #mardigras #marriageequality

Breko and Henshall will officially tie the knot as their float turns the corner at the iconic Taylor Square on the parade route.

The couple have been dating for two and half years after meeting at another iconic Sydney gay institution, Beresford Sundays, a weekly Sunday session for members of the LGBTI community and their friends.

The men’s wedding will be special for a number of reasons, not only because they will be some of the first same-sex people to marry in Australia but also because Breko was a former member of the Mardi Gras board and 2018 is the 40th anniversary of Mardi Gras.

Finally, having the chance to get married after so many years of fighting for equality will also make the moment even more special for the pair.

‘We’ve been campaigning for marriage equality, predominantly through my Facebook page DIY Rainbow, for years so the Yes vote and subsequent swift legislation process has been so great to see,’ Breko said.

‘Obviously we have a place in our hearts for all those before us who didn’t get to see their relationship recognised in time (gosh Australia took so long), and we’ll definitely have them in mind when we get the opportunity to wed on the Parade route as one of the first couples to legally do so.’