Home Gay Life This New York Teen Came Out At His High School Graduation (And... 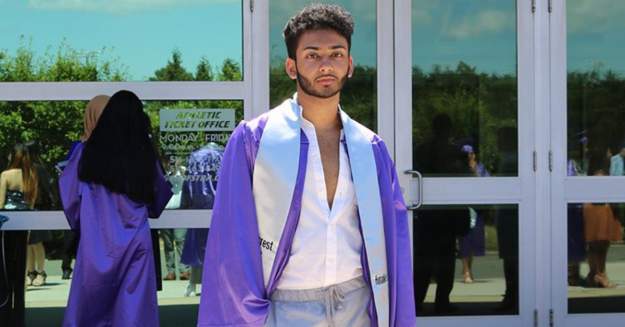 18-year-old Shankar Lal is starting to get some attention on his Instagram account. Why? Because of a video from two months ago.

Earlier this year, Lal decided it was time for him to come out. He first did so by speaking privately to his family, which went… ok.

While his family didn’t outright reject them, he told Buzzfeed News that they were also “concerned and taken aback.”

“I approached this situation as an opportunity to educate them,” he said. “I tried my best to teach them about LGBT people and culture.”

With that job done, Shankar Lal took on the next step. Coming out to his school. And what better time to do that than at graduation?

i genuinely didn’t care about graduation because i mentally checked out in January… ? #classof2018

This past June, Lal graduated from the Media Arts & Music program at Hillcrest High School in New York. It was at his ceremony that he left a lasting impression on his now alma mater.

“I decided that I wanted to come out at graduation a month before it actually happened,” the recent grad told BuzzFeed. “I remember shopping at Target and seeing all the pride gear. I thought to myself, Wouldn’t it be crazy if I just whipped out a pride flag at graduation?”

Thankfully, someone recorded the stunning moment.

“The response was insane,” Lal said. “I walked across the stage with my pride flag over my shoulders and suddenly everyone started cheering for me. I remember hearing my principal and teachers tell me they were proud of me.”

“There was so much love in that room. It was amazing. Even on social media, I had so much love and support. Coming out on graduation was definitely one of the proudest moments in my life.”