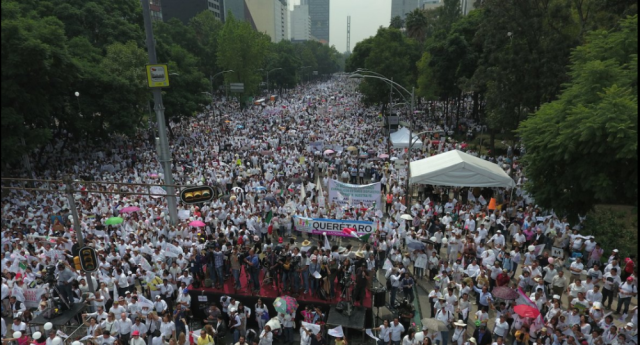 Thousands of people took to the streets of Mexico yesterday to protest against marriage equality. Currently 10 states in Mexico have marriage equality, including Mexico City, but protestors are fighting against same-sex marriage being rolled out across the entire country.

This means that anyone wishing to marry in a different state must sue in order to be recognised. This is because the Supreme Court does not have the power to change all state marriage laws, despite the fact that it has recognised that same sex couples have a constitutional right to marry since 2012.

The protest is another in a string of over 100 protests that have taken place across the country since September 10th. The 132 other anti same-sex marriage marches has an estimated total of 1.2 million people turn out.

The demonstrations were organised by the National Front for the Family, a group of organisations and religious groups opposed to samesex marriage.

As well as organising the demonstrations which drew larger crowds than expected, the National Front for the Family also gathered over 100,000 signatures against the proposal.

These signatures are being used for a ‘citizen initiatives’ proposal which aims to outlaw marriage equality. The initiative is required to have thousands of signatures to even be considered by congress, and the proposal is currently pending.

The president’s proposal of marriage equality has been frozen by congressional leaders in his own party.

He has received backlash for pushing the bill through, this is evident at his defeat at the polls.