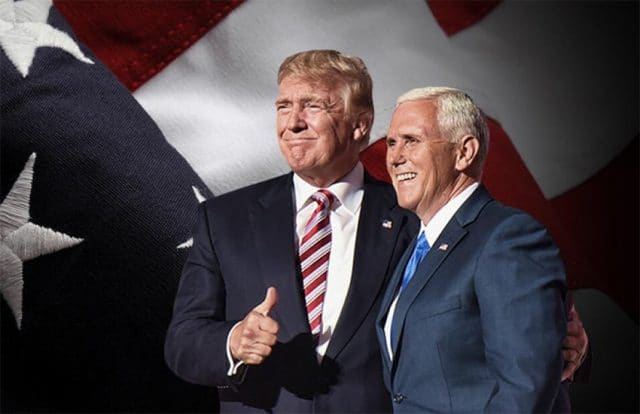 On LGBTI rights, could Mike Pence be even worse than Trump?

President Donald Trump has reportedly said he believes, ‘jokingly’, his VP Mike Pence wants to ‘hang all the gays’.

In the New Yorker profile of the vice president, White House sources have revealed the kind of ‘friendship’ the two men have.

‘Trump thinks Pence is great,’ Bannon told the paper, in a piece titled The Danger of President Pence.

But, according to a longtime associate, Trump also likes to ‘let Pence know who’s boss’.

They report: ‘A staff member from Trump’s campaign recalls him mocking Pence’s religiosity. He said that, when people met with Trump after stopping by Pence’s office, Trump would ask them,

“Did Mike make you pray?”

‘During a meeting with a legal scholar, Trump belittled Pence’s determination to overturn Roe v. Wade.

‘The legal scholar had said that, if the Supreme Court did so, many states would likely legalize abortion on their own. “You see?” Trump asked Pence. “You’ve wasted all this time and energy on it, and it’s not going to end abortion anyway.”

‘When the conversation turned to gay rights, Trump motioned toward Pence and joked, “Don’t ask that guy—he wants to hang them all!”’

The VP supports conversion therapy, as a way to ‘change sexual behavior’, a dangerous and harmful practice condemned by mainstream health groups across the entire world.

He voted for the Marriage Protection Amendment in 2006, a law that would have stopped marriage equality nationwide. He said being gay is a ‘choice’ and that preventing gay couples from marrying was not discrimination, but a means of enforcing ‘God’s idea’.

And in 2007, Pence voted against the Employment Non-Discrimination Act, a law to prohibit workplace discrimination based on sexual orientation. He said the law ‘wages war on freedom and religion in the workplace.’