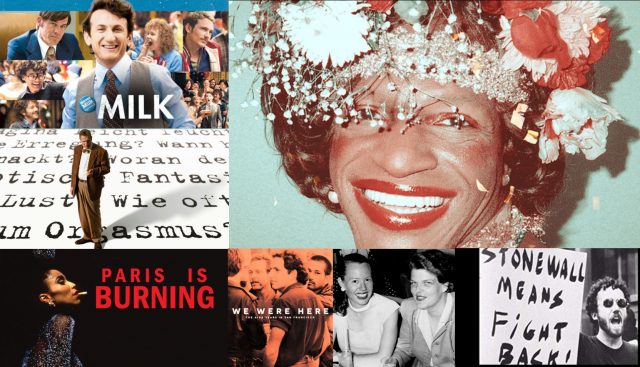 You probably know the story of the 1969 uprising, when patrons of the Stonewall Inn gay bar rioted in protest after they were raided by police. But you might not be familiar with the lives and lessons of the people who participated in this fight.

And what better way to honour the memory of those who fought for the freedoms we enjoy today than by binge-watching some inspiring and educational TV?

We’ve picked the best documentaries and films available to download or stream — so get your friends round, break out the popcorn and settle in for an evening of rich LGBT+ history.

LGBT+ rights activist Victoria Cruz investigates the mysterious death of black gay rights activist and Stonewall veteran, Marsha P. Johnson, who was a central figure in the Stonewall riots. Her body was found in the Hudson river shortly after Gay Pride in 1992.

Sylvia Rivera was a Latina gay liberation and trans rights activist who’s best known for being the woman who got the ‘T’ added to LGBT+. At 12, she was a homeless prostitute, but she battled alcoholism and drug addiction to become a trailblazer in the fight for transgender rights.

Rivera co-founded STAR, a group dedicated to helping homeless young drag queens, gay children, and trans women. She was a regular Stonewall patron and was present on the first night of the riots. This short 25-minute film was created by friends of Rivera after her death at 52.

This documentary takes a deep, reflective look at the gay community of San Francisco following the AIDS epidemic, following key individuals as they rose to the occasion during the first years of the crisis.

Through personal accounts of San Franciscans who lived through the epidemic, the film tells the story of how the gay community adapted and bonded during this heartbreaking time. It’s a powerful reminder of the real human impact of HIV/AIDS.

This is an Oscar-winning biographical film on the life of Harvey Milk, the first openly gay person to be elected to public office in California. Set in 1972, it stars Sean Penn and Josh Brolin and traces Harvey Milk’s career from his 40th birthday to his death.

The film was met with near-universal acclaim when it first came out, with Variety calling it “adroitly and tenderly observed,” “smartly handled,” and “most notable for the surprising and entirely winning performance by Sean Penn.”

Using extensive archival film, movie clips and personal recollections, this Emmy-award winning documentary reconstructs the hidden history of the gay and lesbian community prior to the Stonewall riots.

Spanning multiple decades throughout the 20th Century, including World War II, this landmark documentary is a must for anyone interested in gay culture and the founding of queer neighbourhoods.

This acclaimed documentary is essential viewing for all LGBT+ people, and last year, the Library of Congress selected the film for preservation in the National Film Registry. The incredible arthouse film delves deep into the vibrant, flamboyant ball culture and drag house system of New York City in the late ’80s.

Featuring many black and Latinx gay and trans young people, the documentary explores how the intersections of race, gender, and sexuality create a unique culture. It’s become all the more poignant after so many of the characters passed away in the AIDS epidemic.

This film tells the true story of biology professor Alfred Kinsey, a pioneer in the area of human sexuality research who developed the Kinsey scale to describe a person’s sexual orientation. He was the first person in the scientific community to consider that there was more to sex and attraction than just heterosexuality and homosexuality.

The film follows Kinsey as he develops his then-controversial theories, which would prove to be incredibly significant for the LGBT+ community.

Director Rhys Ersnt said: “The trans movement may be making headlines, but our rich history is often overlooked. Trans people have always existed, and have lived many different lives. The central theme of We’ve Been Around is stated in the title. We’ve been here, throughout time, often hidden in plain sight. These stories show us just how important it is to share our histories.”

The is about the life of Vito Russo, founding father of the gay liberation movement, who found his voice in the aftermath of the Stonewall riots. He’s best remembered as the author of The Celluloid Closet and for being a vociferous AIDS activist in the 1980s.

Vito gives a vivid portrayal of the activist’s life amidst intense social injustice and oppression, told through interviews with numerous people close to him. Informative, educational and inspiring, this film is bound to move you to tears.

This film chronicles the staggering achievements of lesbian activist couple Del Martin and Phyllis Lyon. Together they founded the Daughters of Bilitis (DOB) in San Francisco in 1955, which became the first social and political organisation for lesbians in the United States.

The couple were central in the fight to persuade ministers to allow homosexuals in churches, and worked tirelessly to decriminalise homosexuality in the ’60s and ’70s. They finally got their reward in 2004 when they became the first same-sex couple to marry in San Francisco.