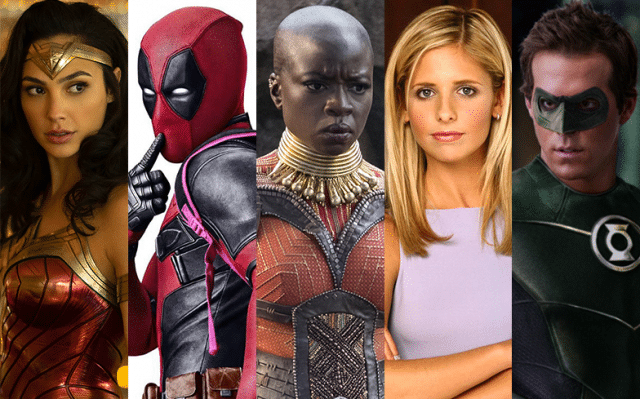 Although comic books have made strides in recent years with queer representation, the same can’t be said on-screen. The most popular movie franchise, the Marvel Cinematic Universe, has so far released 23 critically-acclaimed blockbusters (bar Thor: The Dark World) all of which have failed to include a major LGBTQ superhero. Granted, Avengers: Endgame featured its first out character in a small scene and Jessica Jones has showcased lesbian couples and more recently, a trans character, but there’s still a long way to go.

Earlier this year, Marvel executives confirmed that future Marvel films will start becoming more diverse. Speaking to Vulture, Victoria Alonso, the studio’s executive vice-president said she hoped Marvel would set the standard with diversity. “We’re just determined to have it be how we do it,” she said. “And if we do it, maybe somebody else will do it. I encourage every studio, every indie production company, every filmmaker out there to make an effort.”

In hopes of seeing a major queer hero on the big screen in the immediate future, we’ve rounded up 12 comic book characters that you might not have known identify on the LGBTQ spectrum. We’ve spoke a lot about Marvel, but we’ve also included DC characters – and even Buffy the Vampire Slayer. Yes, she has a comic book… 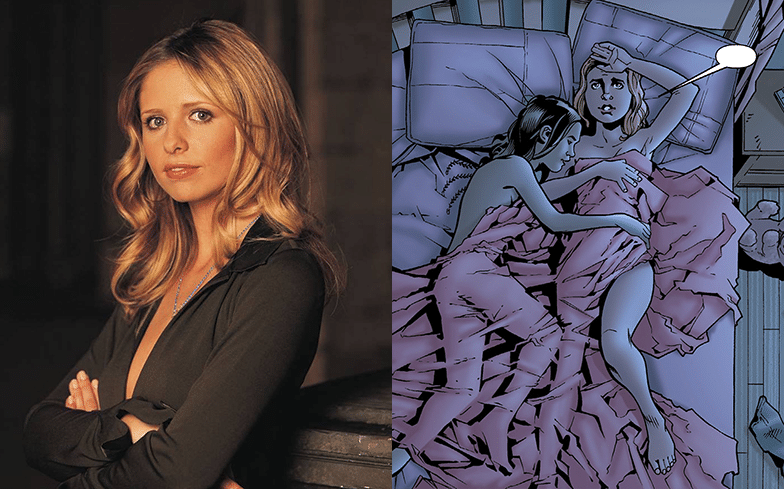 We watched Buffy Summers battle vampires, demons and other forces of darkness for seven seasons on her critically-acclaimed television show, and while she had many love interests (Angel, Riley, Spike), she was never portrayed as queer – unlike her bestie Willow Rosenberg. After the series ended, creator Joss Whedon brought the series back for an official comic book continuation, which saw the titular character explore her sexuality. In the eighth season, a fierce new slayer called Satsu developed feelings for Buffy. The two then slept together, and although the relationship didn’t continue for much longer, fans praised the organic nature of the relationship and hailed Buffy as a queer hero. Many critics, however, called the encounter “out of character” and deemed it a publicity stunt. Buffy actress Sarah Michelle Gellar didn’t seem to have an issue with it, saying: “Buffy’s getting some action! Good for her!” 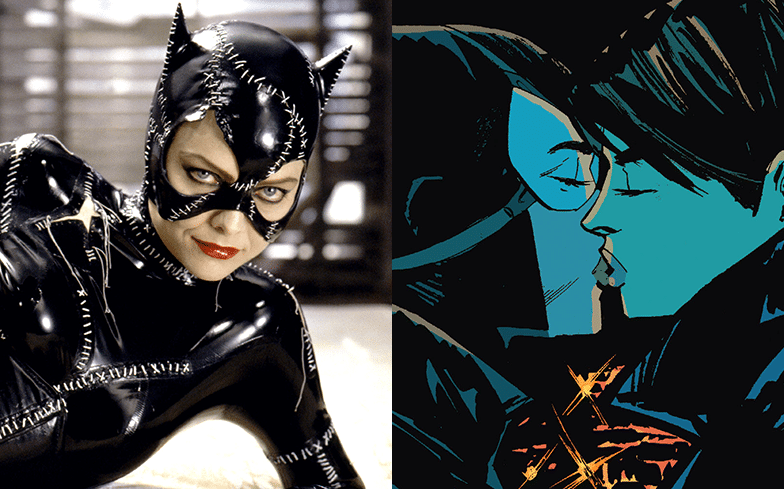 Catwoman has been memorably portrayed on screen several times, most notably by Julie Newmar, Eartha Kitt, Michelle Pfeiffer and Anne Hathaway. One of her main love interests throughout her comic book run has been Batman, but did you know she was actually bisexual? Back in 2015, the character locked lips with another woman and confirmed longtime rumours of her sexuality. Genevieve Valentine, writer for DC’s Catwoman series, said the character – Selina Kyle – was “canon bisexual”, adding: “She’s flirted around it – often quite literally – for years now; for me, this wasn’t a revelation so much as a confirmation.” 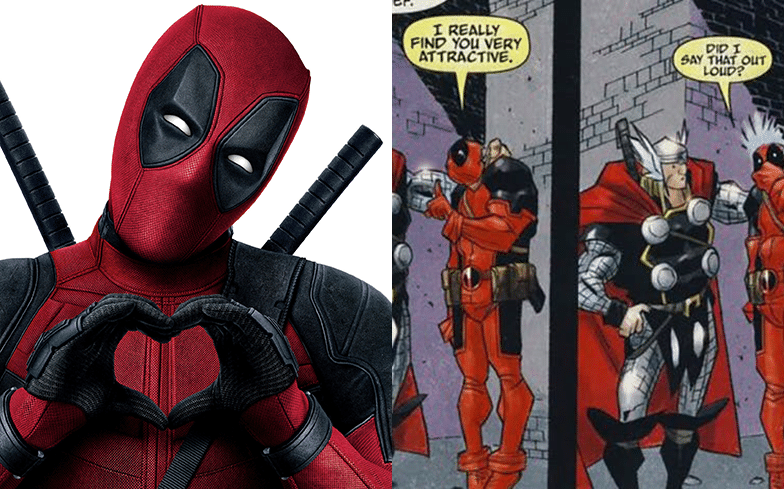 Yep, Deadpool is a queer! In the comics, the merc-with-a-mouth has tried it on with many A-List superheroes such as Thor and Spider-Man. In the strip shown above, Deadpool flirts with the God of Thunder, telling him: “I find you really attractive. Did I say that out loud?” Previous writers of Deadpool have also confirmed that they wrote the character as LGBTQ. Gerry Duggan, who wrote for the character from 2012-2015, confirmed his attraction to “anything with a pulse” on social media. Gail Simone also said she “thought of Deadpool as pansexual”. She wrote comics for the iconic hero for 12 years. Last year, Ryan Reynolds – who plays Deadpool in the critically-acclaimed film series – said he wants to explore the character’s pansexuality in future movies. 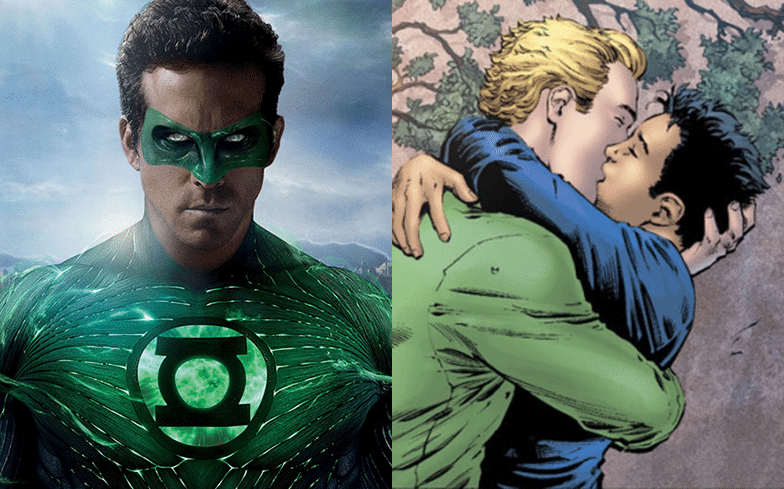 Another character played by Ryan Reynolds – what are the chances? There have been numerous iterations of the Green Lantern in DC’s history, but the first ever hero to take up the mantle was Alan Scott (Reynolds portrayed Hal Jordan), and one version of the character identified as a gay man. In the first issue of Earth 2, which told the story of a parallel universe within the DC Multiverse, Alan is in a committed relationship with a man named Sam, who he plans to propose to on vacation. However, because gay characters always die, Sam dies when their train is ambushed. Very sad. 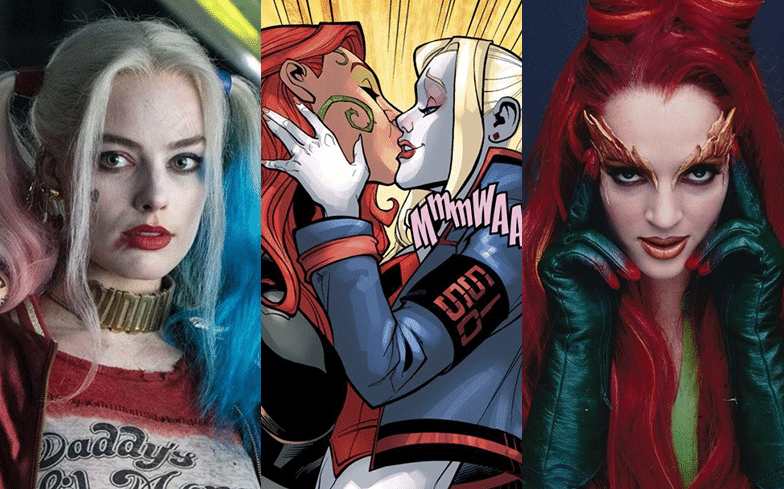 Harley Quinn’s main romantic interest throughout the comics has always been The Joker, but in recent years, the anti-hero has become romantically involved with fellow Birds of Prey character, Poison Ivy. Last year, DC casually confirmed in Injustice 2 #70 that the two tied the knot in Las Vegas by an Elvis impersonator. Margot Robbie – who portrayed the character for her live-action debut in Suicide Squad – said she wants the relationship to be explored on screen. “If you read the comics you know that Poison Ivy and Harley have an intimate relationship,” she said whilst promoting her period drama, Mary, Queen of Scots. “In some comics they convey it as a friendship; in other comics you can see that they’re actually sexually involved as a couple. I’ve been trying to – I would love to have Poison Ivy thrown into the universe, because the Harley and Poison Ivy relationship is one of my favorite aspects of the comics, so I’m looking to explore that on screen.” Poison Ivy made her live-action debut in Batman & Robin, which is widely regarded as one of the worst films in history. However – in our opinion – Uma Thurman’s performance should’ve been nominated for an Academy Award. We will take that to our graves, OUR GRAVES! 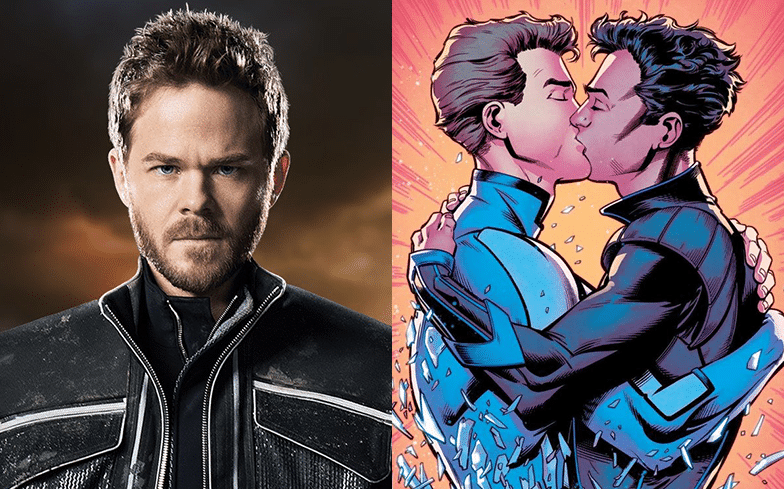 Back in 2015, for the 40th issue of All-New X-Men, a younger, time displaced version of Iceman was revealed as gay by his friend and teammate, Jean Grey, who discovered his sexuality with her powers of telepathy. Later, the character had a passionate embrace with Inhuman star Romeo, which received a full page spread. The storyline divided fans, because the character’s adult, present-day counterpart was depicted as straight, and often embarked upon romances with women. Shortly after, Iceman became the first hero to headline a Marvel comic book series a gay lead – which received universal praise from the LGBTQ community. 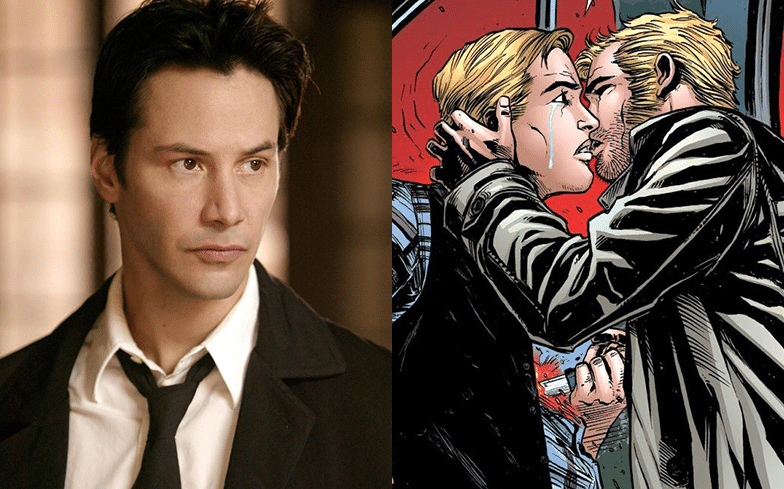 DC character John Constantine is one of the least well-known characters on this list, mostly because he hasn’t had an iconic representation on screen like Deadpool, Iceman or Harley Quinn. His bisexuality was first established as early as 1992, in a comic where he offhandedly admitted to having ex-girlfriends and ex-boyfriends. In Brian Azzarello’s Ashes & Dust in the City of Angels, he was seen having relationships with men. In 2015, his character was relaunched with Constantine the Hallblazer, which confirmed his bisexuality, and in later issues he fell in love with a male bartender called Oliver. Although his self-titled television series was cancelled after one season, the character made his on-screen comeback in Legends of Tomorrow and had a same-sex romance. Yas for representation! 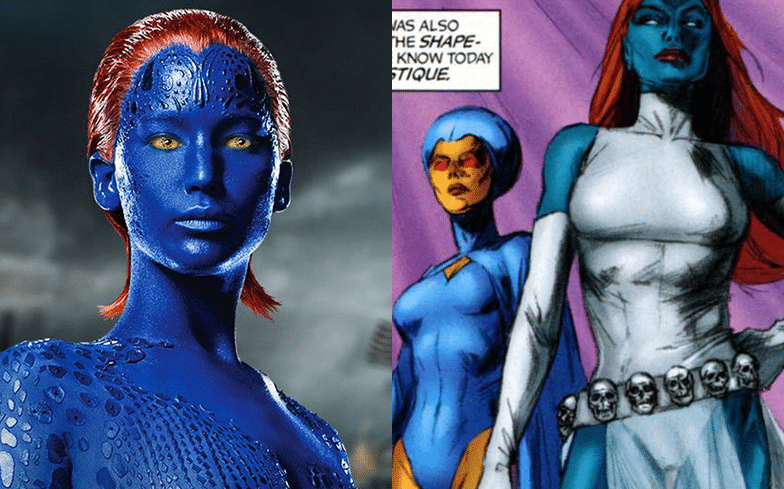 In Marvel comics, Mystique has been romantically linked with iconic heroes such as Wolverine, Magneto, Professor X, Iceman, Deadpool, Gambit, Beast and Sabretooth, but her one true love has been with fellow mutant Destiny. Chris Claremont – creator of Destiny – had originally intended for Nightcrawler to be their biological son, but because this was 1981, Marvel prohibited the explicit portrayal of queer characters and storylines. Mystique was played by Rebecca Romijn and Jennifer Lawrence in the X-Men film series. 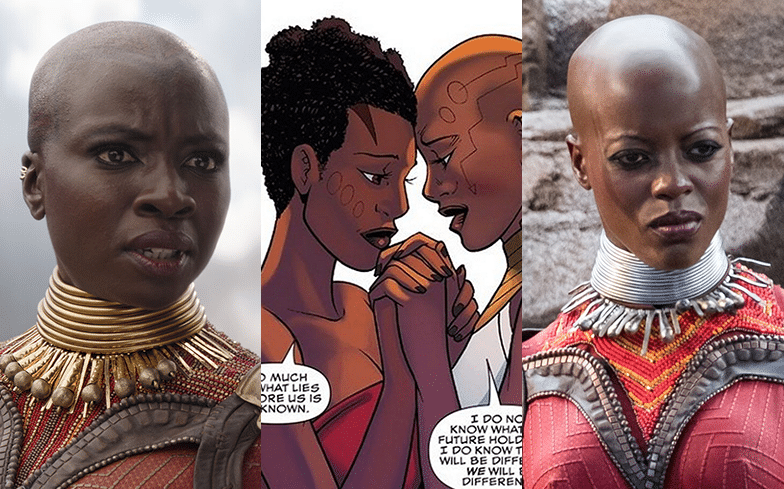 Members of the Dora Milaje, Aneka and Ayo are two fierce, outspoken warriors who become Wakanda’s supreme lesbian power-couple. This romance was almost put to screen in Black Panther last year, but the scene was deleted, leading to widespread backlash among Marvel fans. Joanna Robinson from Vanity Fair was shown an early scene from the film, and commented on the flirtation between two of the members, Okoye (Danai Gurira) and Ayo (Florence Kasumba). “In the rough cut of this Black Panther scene, we see Gurira’s Okoye and Kasumba’s Ayo swaying rhythmically back in formation with the rest of their team,” she said. “Okoye eyes Ayo flirtatiously for a long time as the camera pans in on them. Eventually, she says, appreciatively and appraisingly, ‘You look good.’ Ayo responds in kind. Okoye grins and replies, ‘I know.’” Perhaps a storyline for Black Panther 2? 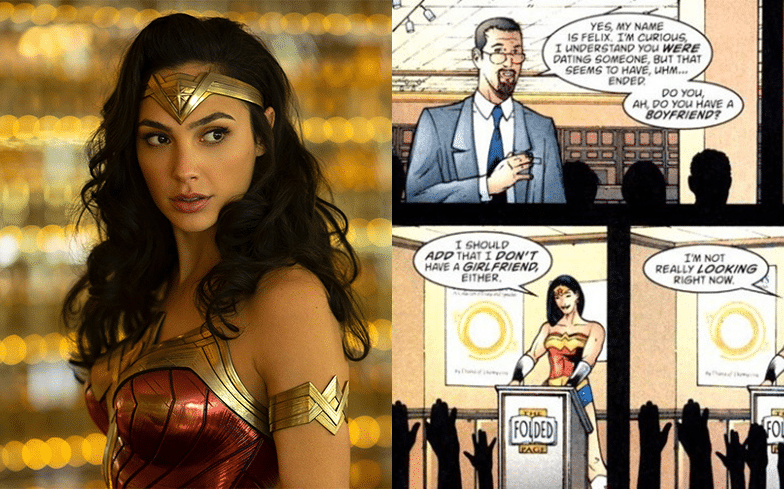 Wonder Woman is queer! Who knew? In 2016, DC announced that their most iconic female superhero – and perhaps the most iconic female superhero of all time – is attracted to both men and women, because on the island of Themyscira, sexuality isn’t an issue. Writer Greg Rucka said: “When you start to think about giving the concept of Themyscira its due, the answer is, “How can they not all be in same sex relationships?” Right? It makes no logical sense otherwise. An Amazon doesn’t look at another Amazon and say, “You’re gay.” They don’t. The concept doesn’t exist. Now, are we saying Diana has been in love and had relationships with other women? The answer is obviously yes.” Seeing as how Wonder Woman has only recently been provided a live-action cinematic adventure – with a sequel arriving next year – hopefully we can see Diana’s sexuality explored on-screen. Imagine the impact on young queer audiences?