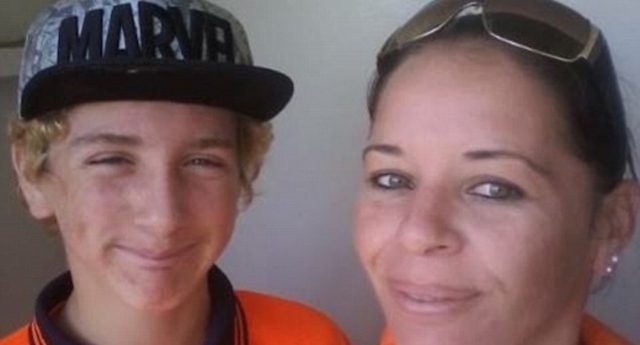 A gay 13-year-old has taken his own life after enduring years of homophobic bullying, both physical and emotional.

Tyrone Unsworth of Brisbane, took his own life, his mother said, and that he had suffered through two years of homophobic abuse which pushed him “to the edge”. Among other insults and physical abuse, Unsworth was called a “fairy” and a “gay boy”.

She told the Courier Mail: “He was a really feminine male, he loved fashion, he loved make-up and the boys always picked on him, calling him gay-boy, f****t, fairy; it was a constant thing from Year 5.”

Writing online, she said: “I know your pain free now son and they cant pick on you anymore, but this shouldn’t of had to happen,” Amanda wrote online after seeing her son’s lifeless body.

“I just wanted him to wake up and come home with me.

“All of this Because of BULLIES thinking there tough ero’s. now i dont have my SON never will i ever get to see my beautiful boy alive.”

Unsworth had been hospitalised recently after being hit in the jaw with a fence paling.

His mother Amanda said he did not want to go back to school after he recovered.

The 13-year-old’s funeral will take place on 1 December.

Of those attending the ceremony, his mother asked that they wear bright colours to say goodbye to her “happy-go-lucky” son
Unsworth’s school principal, Jacquita Miller said she was not aware of the bullying, which took place at the Aspley State High School.

She said she was “sympathetic to all” affected by his death.
His mother said he had wanted to be a vet of a fashion designer and that he had always been happy to offer her style tips. A gofundme page has been set up by Gypsie, who says she is a family friend of Amanda Unsworth, and that she is attempting to help raise funds to cover his funeral costs.

If you have been affected by issues in this article, and live in the UK, call the Samaritans on 116 123. If you are a young person in the US in crisis, feeling suicidal, or in need of a safe and judgment-free place to talk, call the Trevor Lifeline now at 866-488-7386. If you are an adult in need of support in the US, please call the National Suicide Prevention Helpline on 1-800-273-8255.