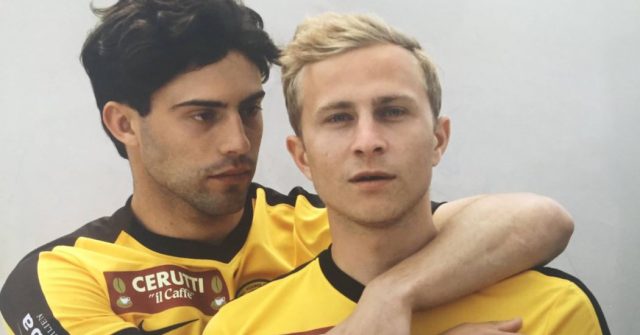 Our list of nine feature-length LGBTQ sports documentaries that provide behind-the-scenes glimpses of heroism and homophobia in athletics was such a hit, we’re following up with a look at feature-length narrative LGBTQ sports films. These movies examine queerness and sports through historic and fictional lenses.

We only chose films where sports play a major role and LGBTQ issues are shown explicitly, leaving out films like “Beautiful Thing” and “A League of Their Own” where sports plays a background role and the queerness remains suggested, respectively.

Interestingly, many of the films listed here originate from Europe and many, unsurprisingly, deal with closeted athletes. But, one in particular deals with disabilities, two deal with trans athletes and three deal with combat sports. Lots of drama abounds on- and off-field in these flicks, but there are also a few comedies to keep you laughing as the action unfolds.

After the U.S. Olympic teams boycotts the 1980 Moscow Summer Games, track-and-field star Chris Cahill — played by Mariel Hemingway — trains hard to achieve her “personal best,” and ends up falling in love with Tory Skinner, a more experienced runner played by Patrice Donnelly. But when a new sexist coach joins the team, he threatens to disrupt their intimate dynamic. Veteran actor Scott Glenn plays the coach.

Craig works as a backroom bare-knuckles fighter in London, taking on increasingly dangerous brawls to make ends meet. When he meets a young music promoter named Matt and then gets a job working at a club, Craig thinks his life is on the up-and-up. But when Matt’s demanding boss, Kelvin, notices that Matt’s loss of focus, his meddling could seriously endanger both men.

Dennis is a 28-year-old gay man who plays on a West Hollywood softball team with his close, catty pals. But as he catches feelings for a 23-year-old named Kevin, the men’s lives start unravelling, making Dean wonder whether his friends are really all that great. Interestingly, this film was directed by gay producer Greg Berlanti (husband of gay soccer player Robbie Rogers) and stars actor John Mahoney who lived in the glass closet until his 2017 death. It was also one of the only gay films during its time not focused on homophobia and HIV.

One of the only queer sports biopics that isn’t a documentary, “Beautiful Boxer” recreates the life story of Parinya Charoenphol, a real-life trans woman Muay Thai fighter, actress and model who made history in 2017 by defeating a male fighter. Starting off as a young priest at a Buddhist temple, Charoenphol eventually joined a Muay Thai fighting camp and earned enough money to support her family and get gender confirmation surgery before she jump-kicked her way into the Asian international spotlight.

The straight-washed trailer above only hints at the gay storyline buried in this film’s second half. In it, the titular character, an aspiring nearly-Olympic boxer, trains with a boxing coach who has a mixed reputation. An intimate moment between the two threatens to tear them apart as Tommy’s star just begins rising.

Despite its cliched and dated jokes about leather bears and trans athletes, this German comedy follows Ecki, a reviled soccer player who gets booted from his local football club after he’s discovered making out with a dude. Determined to redeem himself, Ecki pulls together a ragtag soccer team made up of queer players to take on the team that ousted him.

When Iceland’s bad-boy football star Ottar Thor comes out as gay, his entire life deflates quicker than a punctured soccer ball. His teenage son, boozing wife, judgmental teammates and conservative family don’t understand why he bothered. But when he’s given a choice to return to the pro-sports closet or start playing on a smaller gay local team, Thor has to choose between a glamorous life or an authentic one.

In this German coming-of-age romantic comedy, Tobi, a competitive rower, attends a summertime training camp with his intensely-competitive team. However, he feels confused when he finds himself jealous of his best friend Achim’s new relationship with a girl; also, a boy named Leo from the “Queerstrokes” rowing team starts flirting with him. It all culminates in a literal storm that makes Tobi “come in from the rain.”

It’s unlikely you’ll find an English-language version of this Korean film, but it follows the travails of Oh Dong-ku, a Madonna fan who works part-time to save for gender reassignment surgery. However, her alcoholic father and local coach thinks she’d make a great competitor in ssireum, Korean folk wrestling, and there’s a massive cash prize if she can commit to training and win a tournament. What’s a girl to do?

Morgan once raced as a competitive cyclist until a crash turned him into a wheelchair user. He feels increasingly depressed until he meets Dean, a lover who encourages him to compete once more. Morgan feels determined, but must make a decision when a physical ailment threatens his life. The director, Michael Akers, co-wrote the screenplay from interviews with wheelchair-using gay men, and it’s one of the few films in existence to deal with gay men and disabilities.

Sensitive redhead Ned isn’t as obsessed with rugby as his elite boarding school classmates. So when he’s forced to room with a rugby player, Conor, he’s less than thrilled — until the two bond over a love of music and a shared secret. As Conor’s teammates pressure him to abandon Ned, Ned finds himself increasingly sick of his school’s homophobic snobbery, bringing both boys to a breaking point that could end their friendship.

English football teammates Jason and Ade party in their undies the night before a career-defining championship game. Cocky and cunning Jason — played by gay actor Russell Tovey— seems determined to get under Ade’s earnest exterior. What happens that night — and the next day at the game — haunts both men 10 years later when they compare their respective paths in a hotel room once again.

In this French-Canadian drama, 16-year-old Tim finally faces up to five years of bullying when he takes on his tormentor, Jeff, by competing against him to qualify for the nationals in the 800-meter dash. But as Tim gets ever-closer to achieving the 1:54 qualifying time to make the nationals, Jeff’s bullying and intimidation tactics escalate, forcing Tim to take drastic measures to protect himself and his dignity.

When lesbian tennis great Billie Jean King played her historic 1973 tennis match against then-retired champion Bobby Riggs, she wasn’t yet publicly out. However, her much touted “Battle of the Sexes” match against Riggs threw sexism in pro-sports into stark relief as commentators and Riggs himself doubted the value and capability of female athletes. This film, loosely based on the true story, examines the this sadly timeless issue while conveying King’s clandestine relationship with her female secretary. Interesting side note: Billie Jean King told Outsports the filmmakers originally planned to leave out her same-sex romance, until she insisted it be part of the film!

When two Swiss pro-soccer players develop feelings for one another, their love threatens to affect their careers, team dynamics and on-field performance. Their managers fear that public knowledge of their relationship will hurt the franchise, and their teammates aren’t initially supportive either, leaving the two men unsure how to proceed.