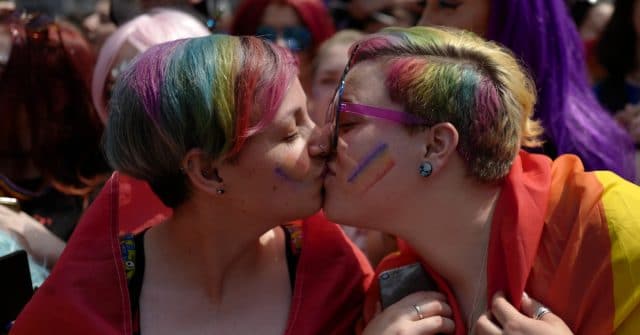 This Pride month, we’ve seen the Home Office signal its LGBT+ allyship by changing it’s social-media avatar to a rainbow – while trying to deport a gay Kenyan rugby player to a country that still criminalises him for his sexuality (thanks to a British colonial-era law.)

And we’ve seen an overwhelming amount of violence against the LGBT+ community worldwide.

But while all that’s going on, we’re missing the bigger picture. We’re missing out on the basic rights granted to our heterosexual, cisgender peers.

So, here is a not-at-all comprehensive list of the rights we still don’t have.

The government put banning conversion therapy in it’s LGBT Action Plan in 2018, but are yet to implement the ban.

People are put in prison according to their legal gender. This means that transgender prisoners without a Gender Recognition Certificate are initially placed in a prison matching the gender they were assigned at birth, pending a Transgender Case Board meeting.

In 2015, two trans women died by suicide in the space of two months while being held in male prisons in the UK,

This has been the case since 2017 – before that, men who had sex with men could only give blood if they’d not had sex for a year (which is still the criteria in Northern Ireland.)

Sex workers can also only give blood if they’ve not had sex for three months. Before the rule change in 2017, sex workers were banned from donating blood at all.

Non-binary activist Jamie Windust spoke to PinkNews in March 2019 about why they launched a petition to get the government to change this.

PrEP stands for Pre-Exposure Prophylaxis (PrEP) and it can drastically reduce the risk of being infected with HIV if taken daily.

But it’s not currently subsidised by the NHS and in April 2019, two-thirds of London sites involved in a trial of the drug had reached capacity and weren’t able to give it to any more gay or bisexual men.

Intersex people are pressured into having surgery to make their bodies conform to the male/female gender binary, despite this not being medically necessary.

And the government doesn’t even know how often this happens.

Five years after same-sex marriage was legalised in the rest of the UK, it remains banned in Northern Ireland.

MP’s Caroline Lucas and Vince Cable have backed a new campaign to lift the ban.

Sex and relationships education hasn’t been updated since 2000 – before Section 28 was repealed.

MP’s did recently vote to include LGBT+ people in new, compulsory sex and relationships education, but it won’t be brought in until 2020.

On June 7, a lesbian couple were beaten up by four men after they refused to kiss on demand. The women were left covered in blood on a London night bus.

Parents have complained to seven primary schools in Manchester about LGBT-inclusive lessons.

Trans people can legally be refused housing in Northern Ireland because of their gender identity.

So we don’t know how many LGBT+ people there are in the UK.

The Scottish Parliament voted on June 12 to ask about people’s sexuality and gender identity in the next census, in 2012.

And they say it’s because of their sexuality. But funding for LGBT+ youth services is being cut.

The Conservative women and equalities minister said in November 2018 that the government would respond to the GRA consultation by spring 2019, but no sign yet.

Theresa May pledged to reform the GRA at the PinkNews Awards in October 2017.