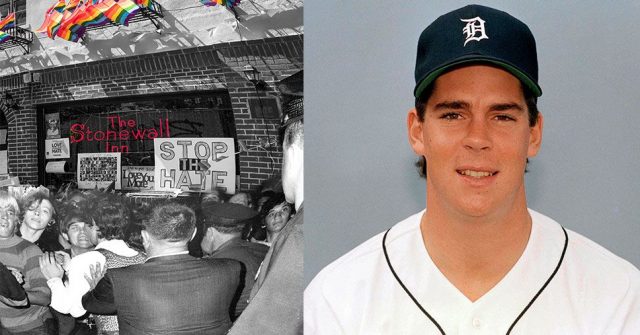 Major League Baseball’s “ambassador for inclusion” is no stuffed suit, or public relations strategist. He is certainly no stranger to the game, either. Billy Bean’s professional baseball career began in 1987 as an outfielder for the Detroit Tigers.

His talent stretched beyond baseball, as a star athlete at Santa Ana High School, where he was selected valedictorian of his graduating class and went on to become an All-America outfielder twice before graduating from Loyola Marymount University in 1986.

After the Tigers, Bean played for the Los Angeles Dodgers in 1989 and then went to Japan to play for the Kintetsu Buffaloes of Nippon Professional Baseball in 1992. His last MLB team was the San Diego Padres from 1993 to 1995.

Bean came out in 1999 — the same year that Outsports debuted — four years after retiring in the prime of his career. unable to reconcile the world of being a baseball pro and living outside the closet.

As Jim Buzinski recalled in 2011, it was a restaurant review in the Miami Herald that changed his life. The article, in an oh-by-the-way fashion, mentioned that Bean and his partner in the restaurant were also partners in life. The item caught the attention of The New York Times, which then did a front page article on Bean, making him a national story and spawning numerous TV and speaking appearances.

Before accepting his job with the league, Bean told Buzinski in 2011 that he still had regrets about how his Major League Baseball career ended after six seasons in 1995. He said that while he loves baseball, he has a hard time watching it without thinking back on his career. Jim spoke with him for a story and he reflected about how his fears about being outed led him to prematurely retire.

If I had only told my parents, I probably would have played two or three more years and understood that I could come out a step at a time, not have to do it in front of a microphone. And I was completely misguided. I had no mentor. I think that’s where the responsibility comes in for people who have lived that experience, and we take for granted that everybody’s adjusted and gets it. I had no one to confide in and that was the biggest mistake of my professional life was to think that if one person knew, everybody knew.

Just having some kind of ally at that time, I think I would have changed and I think I would have played so much better. You can appreciate the degree of despair when you’re hiding something and you’re on the bubble as it is. It just was a really frustrating time for me.

After he came out, the response was nothing but positive and Bean became a sought-after speaker and activist. But one conversation post-coming out with a former teammate was unsettling.

I thought about telling [teammate] Brad Ausmus, and after I came out he said, ‘I can’t believe you didn’t trust me to tell me.’ It was very emotional. We were buddies. We roomed together for two years and he’s a great guy. But I was so uncomfortable with it personally. I think that’s one of the things people don’t understand about athletes that might be gay is that they’re athletes more than they are gay at that point in their life. It was a terrifying and really disappointing realization about myself. I didn’t embrace it. I had sort of angry sex the first few times I played around with guys. It was a naïve unplanned … I just felt like I was driving into a tunnel with my lights out. I had no idea where I was going with it. I was just drawn to this sexuality part and curious but I felt I was dooming myself with my career.

Bean retired before cellphones and the Internet were part of our lives, which made him feel disconnected and isolated. When his lover Sam died, Bean — then with the San Diego Padres — felt he could tell no one and kept his grief to himself. He even went and played a game that day, something unthinkable for a straight player who lost his wife.

Bean had some struggles since his coming out in 1999. The restaurant he and his then-partner Efrain owned went bankrupt in 2000, and Bean turned to selling real estate in Miami. “Not only was I being portrayed as this wealthy ex-big leaguer, I was hustling like nobody’s business in real estate to pay our bills. It was a lot of pressure,” he said.

In 2003, he also wrote a terrific book, “Going the Other Way” to counter some negative reaction he was getting, including from Outsports, for how he was addressing the issue of whether players should come out. Bean and his partner split in 2008.

On July 15, 2014, then-MLB commissioner Bud Selig announced the appointment of Bean as MLB’s first Ambassador for Inclusion. He now serves as an MLB vice president and as special assistant to current MLB Commissioner Rob Manfred. As part of that mission, Bean oversees the MLB’s part in the “Shred Hate” program, teaming up with ESPN, the X-Games and the No Bully non-profit organization, which brings players to schools across the nation and offers lessons to combat bullying. He also leads the minor league education program called Ahead in the Count.

“The core of all bullying prevention education is about inclusiveness,” Bean told Outsports last month. The goal, he said, is trying to create a common ground.

His day to day job has been as an essential motivator for players, coaches, owners and league executives, as well as a liaison between major league clubhouses and communities, always making the case for greater acceptance.

And in just his first 18 months on the job, four front-office executives, one ball boy, one umpire and two Minor League players — one current and one former — came out publicly. That bests the other four Big Five sports leagues combined. And it earned Bean the title Outsports Male Hero of the year 2015.

Bean spoke with me by telephone in March about what his job entails, and he told me what keeps him up at night is the sheer overwhelming abundance of diversity in terms of the league’s many nationalities, languages and cultural customs.

“Our sport is predominantly Hispanic, English-speaking and Spanish-speaking. We have players from Korea, Taiwan and China now, and Japan. So we have challenges in that way, and now we have a cultural collision as well. And so, it’s not as easy as it sounds to get everybody on the same page in one day to eliminate the potential for a disparaging message to come out and represent our sport. I mean these are the things that keep me up at night, and I wake up at 5:00 in the morning, and I feel like I’m shepherding a message. I’m the leader and the communicator of that message. But now, we have clubs truly understanding that they need to start to invest in resources, on the ground education from the very, very beginning. And it is really, really happening.”

Indeed it is, on both coasts this week. Bean’s fingerprints were all over the New York Yankees’ effort to celebrate Pride for the first time in the team’s history, with scholarships, special guests and a permanent memorial. But the former Padre wasn’t in the Bronx that night; He was in Anaheim on Tuesday, to help the Angels host their first Pride Night, which Bean also had a hand in organizing with his old friend and now Angels manager, Brad Ausmus.

In advance of the game, he told HalosHeaven.com that it would be a very meaningful night.

“The thing I went through and where baseball is now as opposed to where it was when I was a player and I’m going to be, I know I will be moved greatly when I see that acknowledgement of the Angels reaching out to the LGBT community in Orange County. It’s still a big deal for me.”