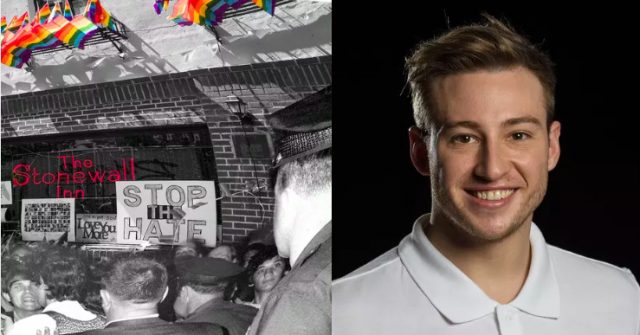 Matthew Mitcham had a 2008 to remember forever.

The Australian diver came out as gay, mere months before the Beijing Summer Olympics. At the Games, he stunned the heavily favored Chinese on their home turf to win the gold medal.

But more importantly for LGBTQ people in sports, Mitcham won his gold medal with his then-boyfriend cheering him on from the stands.

The moment was electric as Mitcham set a record with his final dive to win the gold. Outsports’ servers crashed as the dive was shown in the U.S. and people rushed to search for the then-relatively unknown diver.

Mitcham decided to come out prior to the Games because he was proud of being gay and wanted to compete openly. NBC was taken to task for ignoring Mitcham’s sexual orientation and the fact that the man they showed in the stands cheering him on was his boyfriend.

The Australian reporter who wrote Mitcham’s coming out story described the moment Mitcham had with boyfriend Lachlan Fletcher after the winning dive:

He kissed him briefly in the stands and gave him his Olympic bouquet. Later, outside the glowing blue Water Cube, Matthew Mitcham and his partner, Lachlan Fletcher, firmly embraced, both shedding tears. …

Carefully nursing Mitcham’s Olympic bouquet, Fletcher spoke of the incredible journey that the diver had taken to the top. Fletcher has been the one constant over the past two years.

He was his rock when Mitcham retired in his late teenage years suffering anxiety and depression. He watched him become a stunt diver at the Sydney Royal Easter show, supported his fight back into the sport and now to win Olympic gold.

”It’s been so up and down,” Fletcher said. “When I first met him, he was pretty unhappy, he wasn’t liking the diving in Brisbane at all, he didn’t want to do it, wasn’t happy being there”

Mitcham used his new fame to become and activist for LGBTQ rights and to show that openly gay athletes could compete at the elite level and win.

”Ideally I would like one day for sexuality to be as unimportant and uninteresting as hair color, or eye color or even just gender in general,” he said prior to the 2012 Olympics. “One day it will get to that.

”But until it is easy for sports people to come out without fear of persecution or fear of lost sponsorship income and stuff like that, or fear of being comfortable in the team environment, I don’t mind attention being brought to my sexuality in the hope that it might make other people feel more comfortable … in being comfortable enough about who they are in their sporting environment.”

Mitcham continued with his diving success, winning world No. 1 status in 2010 and Commonwealth Games gold in 2014. He retired in 2016.

Mitcham and Fletcher are no longer together. The retired diver, 31, announced his engagement this month to his British partner, Luke Rutherford.