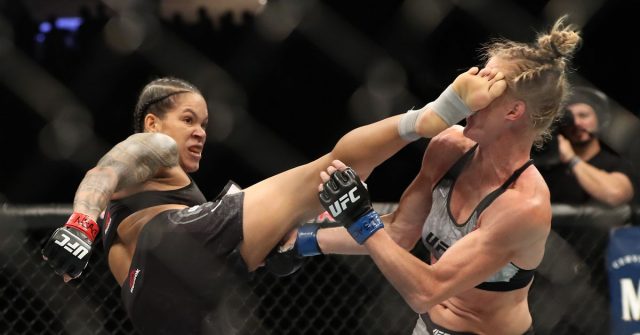 At the recent Ultimate Fighting Championship (UFC) 239 event in Las Vegas, out UFC Women’s Bantamweight Champion Amanda Nunes became the highest paid fighter at the event after she TKO’d former champ, heterosexual Holly Holm, with a kick to the head and punches.

“The Lioness” won the match within four minutes 10 seconds of the first round — Holm called it a “nightmare.”

Nunes went home with the largest payday of the 23 other sluggers on the fight card. MMAfighting.com explains that salary figures released by the Nevada State Athletic Commission reveal:

In comparison, Holm made $300,000 that night and other fighters made anywhere from $500,000 to $12,000. “These figures do not include any pay-per-view bonuses or other payouts made by the UFC behind the scenes,” MMAfighting.com writes.

Nunes’ payday is a big deal when you consider it as part of her history as a lesbian UFC trailblazer. While other out lesbians have been UFC fighters — Liz Carmouche, Raquel Pennington, Jessica Andrade, Nina Ansaroff and Tonya Evinger, for example — Nunes is the only title holder among them.

She won the Bantamweight title in July 2016 by defeating the heavily favored Miesha Tate, becoming the first gay grappler and first Brazilian woman ever to hold a UFC title. In January 2019, she became the first woman in UFC history to hold two championship belts when she knocked out Cris Cyborg to win the featherweight title.

In May 2017, Nunes was honored by the Los Angeles City Council. In a 2017 interview with USA Today, Nunes discussed being a gay role model:

“Now I know how much weight I carry for being gay, for being a champion, and for being a mirror for many young girls…. I want to help with the things that were hard for me. So I think as a champion I can help out a lot. I accomplished my dreams, and I’m gay, I think anyone, running after their goals, earning it, being good, they can make it there.”

Nunes, whose fiancée is her training partner and fellow fighter Nina Ansaroff, will soon appear in the ESPN magazine Body Issue, scheduled for publication this September.