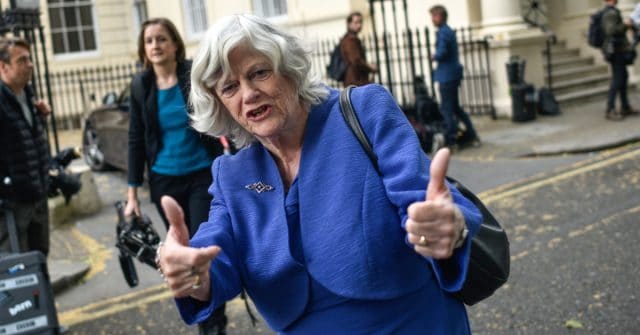 Ann Widdecombe has had a planned date of her ‘An Evening With…’ theatre show cancelled in light of her comments on a cure for homosexuality.

The Brexit Party MEP was set to perform her ‘Strictly Ann: An Evening With Ann Widdecombe’ show at Devon’s Landmark Theatre in March 2020.

But after she claimed that “science may yet produce an answer” to being gay, the company which runs the theatre has pulled the event.

“Took no time in immediately cancelling her planned ‘Evening With’ event at one of our venues. We will never provide a stage for these vile people.”

Hutchinson told stage newspaper The Stage that statements like Widdecombe’s “promote and fuel discrimination,” and that he and his team “will not be complicit.”

“We don’t seek to prevent discussions where there might be differences in opinion—but in this case, there is no discussion to be had,” he added.

Widdecombe has already performed two nights of her tour, and is set to appear in Lytham St Annes, Lancashire on June 11 and in Altrincham on June 12.

Widdecombe first spoke about a theoretical cure for homosexuality in a 2012 column.

Writing in the Daily Express, the right-wing politician argued: “A man who wants to be a woman will receive not only the necessary operations but also a huge amount of psychological support and counselling.

“So will the infertile who desperately want children. Yet the unhappy homosexual should, according to gay activists, be denied any chance whatever to investigate any possibility of seeing if he can be helped to become heterosexual.”

When quizzed about her stance during a Sky News interview on Sunday (June 2), Widdecombe doubled down on her rhetoric.

She said: “The fact that we now think that it’s quite impossible for people to switch sexuality doesn’t mean that science may yet produce an answer.”

Celebrities and politicians were quick to mock Widdecombe’s archaic views.

Mayor of London Sadiq Khan tweeted: “She may have changed her party, but she hasn’t changed her stripes. Ann Widdecombe is still peddling homophobic, bigoted, anti-LGBT and anti-science nonsense.”

Broadcaster and activist Stephen Fry quipped: “But will science ever find an answer to Ann Widdecombe?”

Brexit Party leader Nigel Farage rejected calls to discipline Widdecombe on Tuesday (June 4), telling Good Morning Britain: “Science may provide all sorts of answers that you and I don’t know about. Ann Widdecombe is a devout Christian and there is nothing wrong with that in my opinion… she will have views on abortion, on homosexuality that are very different to those held by many others.

“I think these things are matters of conscience, I don’t think they’re matters for party leaders to support or condemn.”