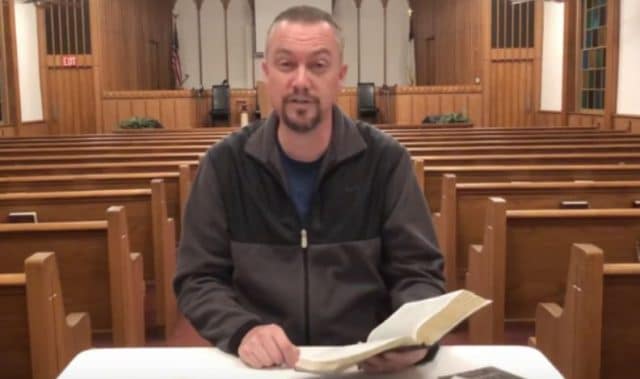 An anti-gay preacher in Alabama has been arrested after confessing to his entire congregation that he molested at least one young boy from the church on multiple occasions.

John Thomas Martin, the lead pastor at Lighthouse Baptist Church in Florence, Alabama, broke down at the pulpit during a Sunday sermon in June, telling stunned churchgoers about his “affair” with an underage male, reports local news station WAFF48.

Martin admitted to abusing the boy on multiple occasions, both at his home and on trips. He also reportedly sent explicit text messages.

According to court documents, the victim claimed that on a camping trip to celebrate Martin’s son’s birthday, the pastor got into the victim’s tent and touched him. Another time, Martin assaulted him in a van while on an overnight trip out of state. Martin was also a school bus driver for Florence City Schools and allegedly showed the boy nude photos of himself with a towel draped over his body.

After confessing to his congregation, Martin checked himself into a psychiatric unit at North Alabama Medical Center and turned over two guns. According to the sheriff’s office, Martin had asked his wife to take his pistol earlier “because he had been holding it to his head and contemplating suicide.”

According to the Lauderdale County sheriff, the victim was “in either 6th or 7th grade” the first time Martin sexually assaulted him.

Martin was charged with four counts of sexual abuse involving a child younger than 16, reports AL.com.

A church representative contacted the Department of Human Resources after the confession and said that on June 23 Martin told the congregation he had “disgraced his family name because he had sex with two boys.”

Martin is currently being held in the Lauderdale County jail with $60,000 bail.

If convicted, Martin faces up to 10 years in prison for each count.

Martin reportedly joined the congregation in 2010 and has been vocal in his opposition to LGBTQ rights.

“We believe that any form of homosexuality, lesbianism, bisexuality, bestiality, incest, fornication, adultery, and pornography are sinful perversions of God’s gift of sex,” reads a statement on the Lighthouse Baptist website. “We believe that God disapproves of and forbids any attempt to alter one’s gender by surgery or appearance.”