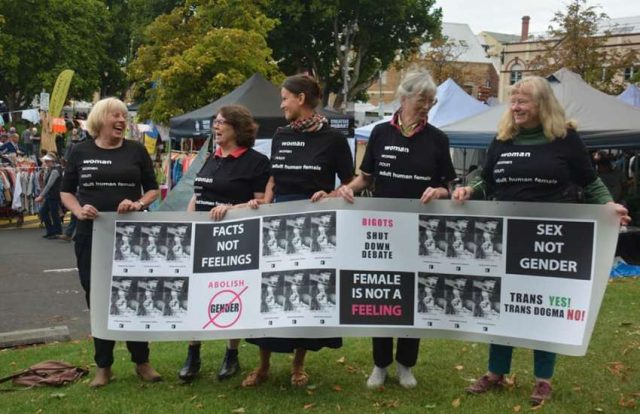 What a delegate first pitched as a way to promote inclusivity quickly went south after Hobart City Council invited a trans-exclusionary radical feminist group – Women Speak Tasmania – to have their say in the design process.

The original motion stated that the posters would be developed ‘in collaboration with relevant organisations, such as Working It Out and Transforming Tasmania,’

Non-binary councillor Ewin expressed their confusion over why other aldermen wanted to include the group.

‘I guess from their [the aldermen’s] perspective it’s in the interests of balance and impartiality,’ they said.

‘Women Speak Tasmania] flat out think trans people shouldn’t be using public restrooms unless they’re using non-gendered bathrooms or the sex that they were assigned at birth,’ they said.

She claimed the group supports the protection and safety of transgender people, but she does not think ‘trans women are women.’

The member said: ‘It smacks of somebody trying to ensure that there isn’t actually a poster at the end of it,” she said.

In the rugged, bumpy state of Tasmania, LGBTI citizens have it pretty smooth.

The media once referred to the state as ‘Bigots Island’ up until the late 1990s. That is when lawmakers began to recognize pro-LGBTI bills.

Tasmania was the final patch of the continent to decrminalize homosexuality. Following this, social programs and political attitudes quickly swayed in favor of LGBTI people.

In fact, support for was some of the highest in Australia; 63.6% voted in favor.