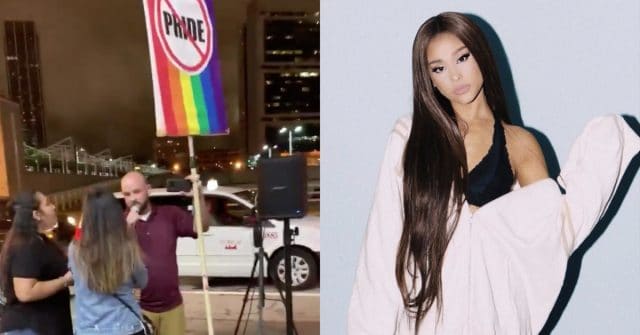 Ariana Grande has stood up for her LGBT+ fans, hitting back at an anti-gay protestor who disrupted fans entering an arena for her Sweetener World Tour.

The ‘Thank U, Next’ singer said that she was “saddened but not surprised” by a video showing a homophobic protest taking place outside of her concert in Atlanta on Saturday (June 8).

The clip, which was shared on Twitter, shows a man holding a rainbow banner with the word Pride crossed out.

Several fans confronted the protestor, pointing out that June is Pride month and asking him: “What kind of Christianity is this?”

He replied: “God wants you to repent.”

<p dir=«ltr» lang=«en» xml:lang=«en»>f*** these dudes outside the Ariana Grande concert spreading homophobia and being f****** stupid and it took EVERYTHING in me not to kick him in the balls with me heels on pic.twitter.com/ukd3wIvrMz