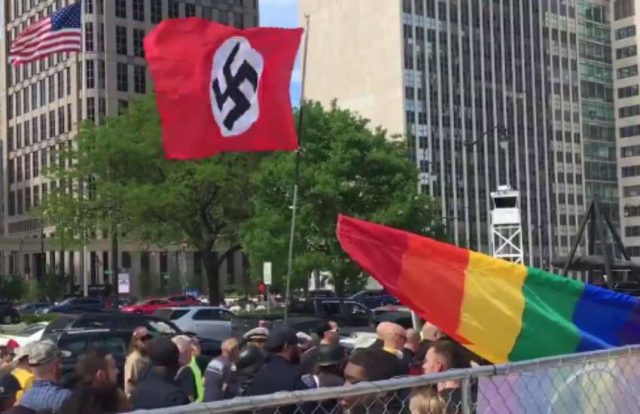 An armed group of self-described white supremacists have crashed Detroit Pride with the help of police escorts. The incident happened yesterday (Saturday, 8 June).

‘[The National Socialist Movement] NSM will be armed and counter-protesting the freaks,’ Burt Colucci, the self-identified ‘commander’ of NSM, on Russian social network VK. ‘NSM, let’s put some boots on the ground!! I don’t really give a damn about op-sec or Antifa in this situation. We go in with Swastikas blazing and if people don’t like it, tough shit.’

Photos and videos from the event show about ten NSM members dressed in black. Some carried weapons. They were led through the crowd of thousands of Pride-goers by police officers. Some of the NSM members can be seen tearing Pride flags and pushing people. One even urinated on someone’s Israeli flag.

Many Pride-goers were rightfully upset by the presence of NSM, especially as they got police protection.

‘Why are you protecting them? These are literal Nazis,’ one voice in a video can be heard saying.

‘How come they get protected and we’re not,’ shouted another. ‘Our police should be protecting us.’

At the same time, a woman marching under a swastika flag used a megaphone to shout, ‘you are all trash’ to the people celebrating Pride.

Website The Grit that no injuries were reported. There is currently no word about if NSM plans to return to other activities during Motor City Pride.