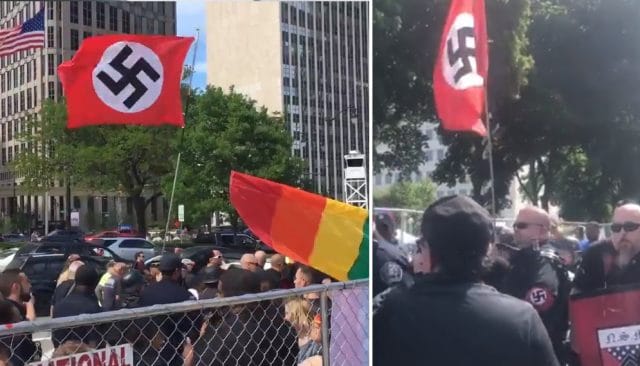 Members of the National Socialist Movement (NSM) caused alarm and outrage at the annual LGBTQ+ event as members of the neo-Nazi group were seen ripping apart a rainbow flag and another urinating on an Israeli flag, according to The Hill.

The Southern Poverty Law Center classifies the NSM as one of the largest neo-Nazi organizations in the U.S. and is known for “theatrical and provocative protests.”

Some took to social media to express their frustrations that “Detroit PD escorted Nazi’s in full uniform outside of the entrance to the festival. Detroit PD bruised those that tried to intervene (see below) and allowed this to happen.”

One voice in a video is heard shouting; “Why are you protecting them? These are literal Nazis.”

“How come they get protected and we’re not,” shouted another. “Our police should be protecting us.”

Today at Motor City Pride, a friendly LGBT+ event, Detroit PD escorted Nazi’s in full uniform outside of the entrance to the festival. Detroit PD bruised those that tried to intervene (see below) and allowed this to happen. pic.twitter.com/lDcbemzhek

“[The National Socialist Movement] NSM will be armed and counter-protesting the freaks,” wrote Burt Colucci, the self-identified “commander” of the neo-Nazi NSM, on Russian social network VK. “NSM, lets put some boots on the ground!! I don’t really give a damn about op-sec or Antifa in this situation. We go in with Swastikas blazing and if people don’t like it, tough shit…”

“I do not see the n—–s, homosexuals, Mexicans, Jews, or even child molesters ashamed or afraid to speak their minds and rally, march, post, and be activists for their sick cause,” wrote former NSM member, J.T. Ready, in a 2008 blog post. “Too many brave men and women died to give me the chance to fight now. I will honor their blood and fight for soil.”

No one was injured Saturday during NSM’s demonstration at Motor City Pride, which was expected to draw 40,000 attendees and is the largest Pride Month event in Michigan.