Home Gay Life Armistead Maupin is proud Tales of the City is queerer than ever... 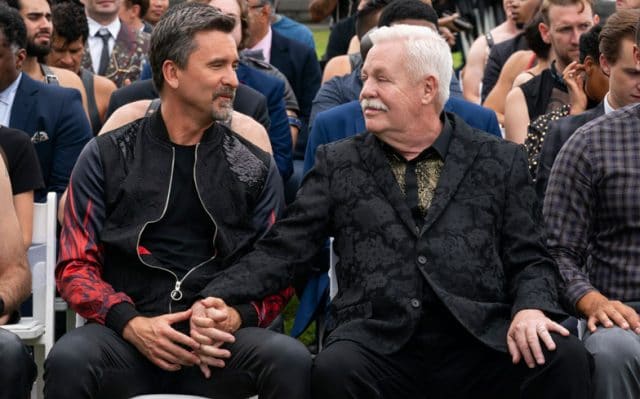 Huge progresses have been made in LGBTQ representation in the 43 years since Maupin began penning the stories, which were initially serialised in the San Francisco Chronicle before being turned into novels and eventually adapted for television, prompting the 75-year-old to marvel: “Any old queer, this one in particular, will tell you it’s gotten better for us and we can’t believe what we’re seeing right now.”

With a satisfied chuckle, the author adds: “The main thing I can’t believe I’m seeing right now is this version of Tales Of The City in 2019. It’s going to every country except the ones that don’t have Netflix, so it’s going to Iran and China and North Korea.” He laughs. “All the places where Trump is popular.”

Tales Of The City is queerer than ever this time round, with Mary Ann Singleton (a peerless Laura Linney) returning to 28 Barbary Lane after 20 years away to discover lovably eccentric landlady Anna Madrigal (Olympia Dukakis) is hostess to some familiar faces as well as some new ones – including Garcia’s trans man Jake, Ellen Page’s very woke gay girl Shawna and May Hong’s sexually fluid Margot.

These vivid new characters sprang from the experiences and imaginations of an all-queer writers’ room. “And at first heard I thought ‘Maybe we should have at least just one token straight person’,” Armistead jokes. “Then I remembered I didn’t have token straight people when I wrote the goddamn thing. It’s great that we have our voices heard in so many ways this time round.” 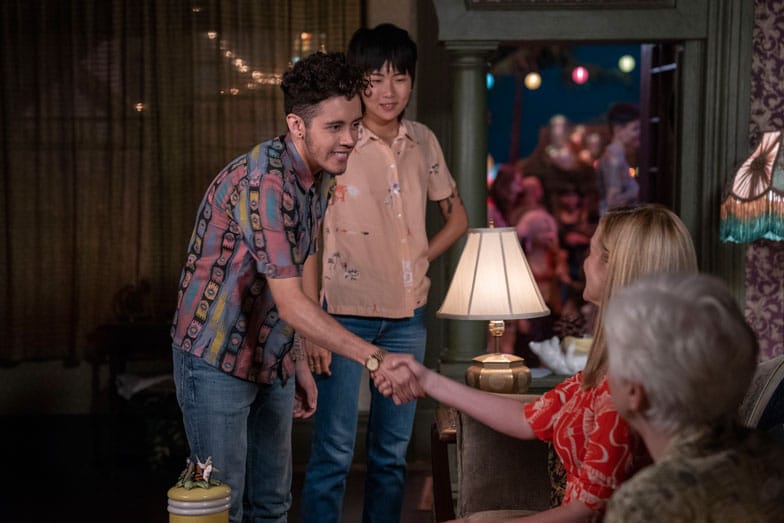 The first series debuted in 1993 and was produced by Channel 4 and PBS, then when the latter pulled the show (allegedly because of pressure from religious groups and the far right) its two sequels were co-produced with Showtime and aired in 1998 and 2001 respectively. Maupin feels this fourth series couldn’t be more timely, with the writer of a memoir entitled Logical Family saying: “I think we all need to feel the security of a logical family, of kindred spirits around us. But I’m uncomfortable about analysing it too much. I think people need to take the ride for themselves.”

And what a ride Tales Of The City 4.0 is! Without spoiling things with spoilers, it brings back Michael ‘Mouse’ Tolliver (played by Looking’s brilliant Murray Bartlett) and gives him a younger boyfriend, which leads to a few generation-gap clashes. The new characters (which Armistead is thrilled to note represent “all the colourations of the flag”) have all sorts of dilemmas to contend with, plus there’s a flashback to Mrs Madrigal’s life as a trans woman in 1960s San Fran and a blackmail plot that’s as edgeof-the-seat thrilling as it is comical.

Showrunner Lauren Morelli (lead writer for the first two seasons of Orange Is The New Black) promised Armistead she’d preserve the DNA of the story. “And I think she’s lived up to that fully. It’s like something I would write even though a lot of it is brand new.”

Then there’s Laura Linney, who has played the adorably naive Mary Ann across all the TV shows and this time is also one of the producers. Armistead sees her contribution on both sides of the camera as invaluable. “Laura’s an extremely diplomatic person so she works well with others and she’s often willing to do something that puts her in an unflattering light because she knows the end result will make us love that character even more.”

He was crushed when PBS pulled the show. The public broadcaster said it was for budgetary reasons but Maupin blamed it on objections from the likes of the Christian-values-touting American Family Association. “We’d given them their highest rated drama series after Upstairs, Downstairs and they basically betrayed the property because they were afraid of the AFA and the same right-wing organisations that are making America horrible again.” 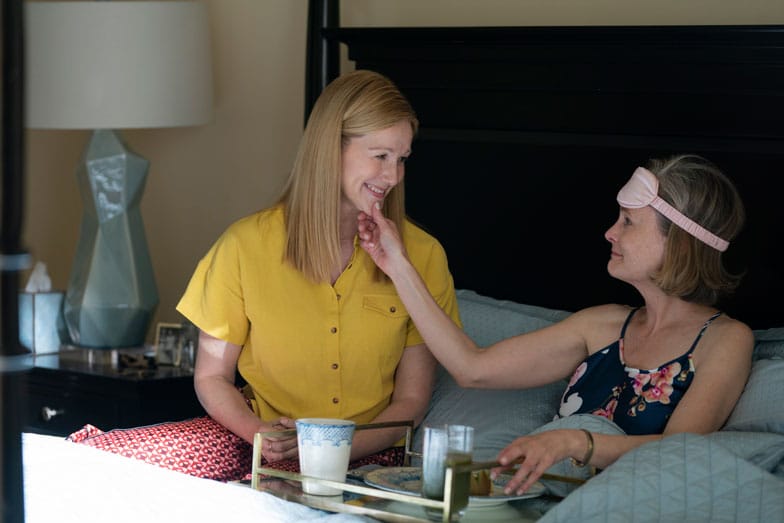 Laura Linney, also interviewed in this issue, believes the latest series – which celebrates the fact folk have never been openly queerer – is about giving Tales Of The City to a new LGBTQ generation and empowering them. “Absolutely!” Armistead agrees. “One of the big things that the new series says is that we’re all in one family, regardless of our ages.”

Lessons to be learned, Maupin feels, relate to where we’ve been and where we’re going. “We have something to teach each other and it’s enormously gratifying when that happens,” he says, although he’s reluctant to go into the whys and the wherefores. “It’s not in my nature to preach. This is a story about the richness of humanity and the glorious variety of queerdom. There’s no one way to do it and there never has been.”

With another of many laughs he adds: “I always say I’m not gonna be one of those old queers who gripes about Grindr, saying ‘In my day we had to walk miles through the snow just to suck a cock’ – and it’s one of the big hits of my public appearances when I say that. We have no right to claim that our experiences, good and bad, make us superior to the younger generation. I know very evolved young people and old people who are the same way and I also know some pretty terrible people who have no conscience at all.”

In Anna’s flashback episode there’s a news clip referring to Frisco’s emerging gay population as “shadowy individuals” inciting fear and curiosity. “And that’s not made up, it’s how they were describing homosexuality on television. I wasn’t evolved enough to be indignant but I was terrified by it. A lot of people were terrified. My mother, when I told her I planned to be an out writer, said she was afraid it would hurt my career and I told her as nicely as I could that it was my career. I realised back then that that was my job in the world – to be happily out and to share the exhilaration of that state.” 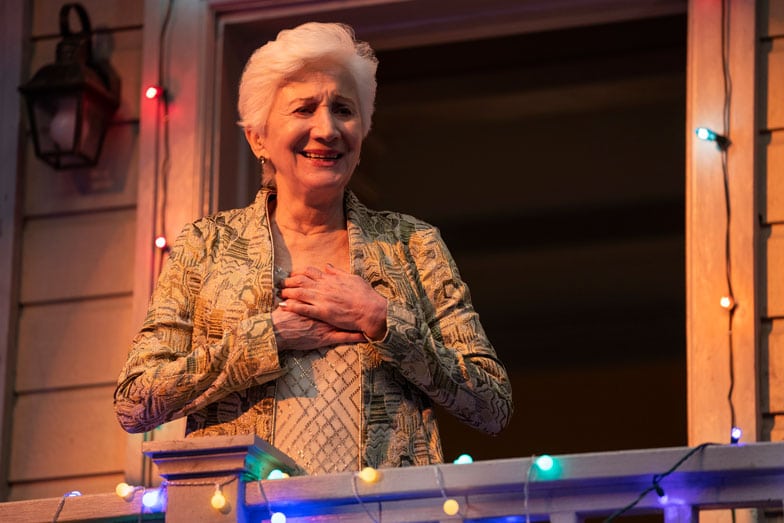 The same episode also recreates the Compton’s Cafeteria riot in 1966, when transgender women and drag queens clashed with the police. Maupin didn’t witness it first-hand. “But I’m happy we’re educating the public about that event. It marks a moment when people got fed up. It was the manifestation of ‘We’re not gonna take this shit anymore’.”

The Compton’s incident came three years before the even more seismic Stonewall riots. This year marks the 50th anniversary of the New York uprising and, remarking that Tales Of The City is a mere seven years younger, the author says his creative journey has been “a glorious struggle every step of the way”.

How so? “I’ve had to fight for my footing everywhere – at the newspaper, with my publisher sometimes. When I introduced a trans man character ten years ago [in Michael Tolliver Lives] my editor was horrified that I’d included a sex scene but it was something I wanted to explore.” There was similar opposition earlier, when he was told not to reveal Anna Madrigal’s so-called ‘dark secret’ for at least a year because the paper worried about losing readers. “But of course the reality was that they loved her already and were prepared to accept her. That’s why our current trans heroes are so important because by exposing themselves to the world they’re winning over hearts and minds.”

Murray Bartlett is the first openly gay Michael. “And I think he’s superlative,” Armistead raves. He’s equally impressed by Garcia, Jen Richards as the young Anna, and Daniela Vega as a trans woman who plays a major part in her story. “To have such fine actors who are known trans people playing trans characters, that’s so wonderful to me.”

Having written nine Tales novels, the most recent being The Days Of Anna Madrigal in 2014, Maupin has never really left Barbary Lane but its return to TV screens proved emotional for him. “I wept on the set and I wept when I saw it,” he admits. “Sometimes I just wept for joy that it was happening and that we somehow have made it every bit as universal as it’s always been.”

And this time, of course, on a much bigger platform.