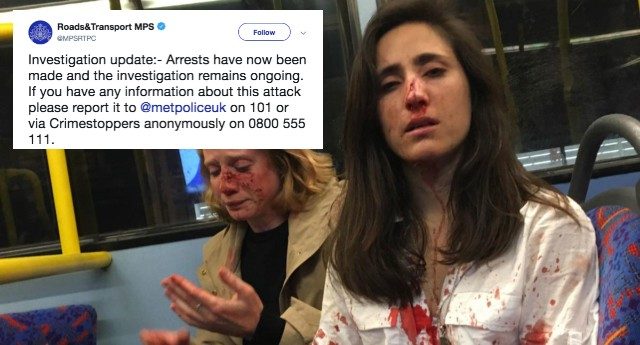 Arrests have been made in the case of two lesbians who were violently attacked on a London night bus on May 30, the Metropolitan police has confirmed.

“Arrests have now been made and the investigation remains ongoing,” the MPS said on Twitter.

The two women were going home on the night bus when a group of men started making comments and asked them to kiss.

When the women refused, they were beaten up.

Melania Geymonat shared a photograph of herself and her girlfriend Chris covered in blood after they were set upon by a group of four men in the early hours of May 30.

The couple were on a night bus in north London heading home from a date when the incident took place.

“We must have kissed or something because these guys came after us,” Geymonat wrote on Facebook on Wednesday (June 5).

“I don’t remember if they were already there or if they got on after us.

“They started behaving like hooligans, demanding that we kissed so they could enjoy watching, calling us ‘lesbians’ and describing sexual positions.”

Queer people on Twitter have been pointing out that this kind of violence against lesbian women has been happening for years.

“For straight men, it was the most significant bit of misogyny they’d ever seen. For queer women it was Tuesday,” said one Twitter user.

“Seeing way too many ‘What has this country become?’ responses to the news of a lesbian couple beaten up for refusing to indulge strange men’s sexual fantasies,” said CN Lester, a trans author. “I thought this was FAR from a new problem.”

Ely Percy, a queer Scottish author, added, “Yeah when I was seen as one half of a lesbian couple … got it all the time. Men asking us to kiss or asking which one was the man. Honestly you’d think they’d come up with new material.”