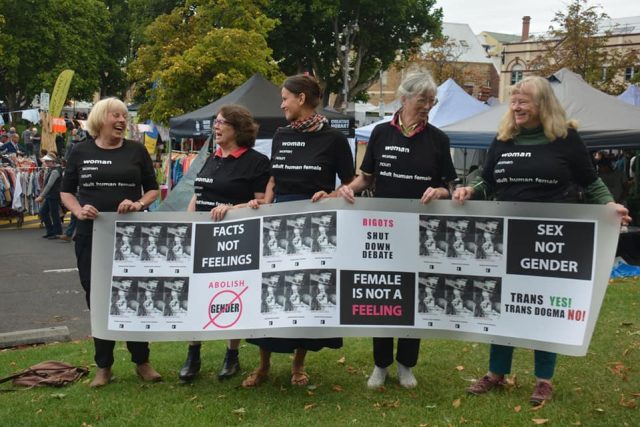 A trans-exclusionary group has been invited to collaborate on a set of posters designed to promote transgender inclusion.

Hobart City Council in Tasmania, Australia, voted in May to introduce new signage in public bathrooms, with the aim ofbolstering the state’s “world-leading” transgender rights.

Councillor Holly Ewin, who is non-binary, wrote in their initial motion that the council would collaborate “with relevant organisations” including transgender and intersex groups.

On Thursday (June 7) an amendment was passed extending an invitation to Women Speak Tasmania (WST), which Ewin has accused of being “just an anti-trans group posting anti-trans sentiment.”

They said that they were confused by the aldermen’s decision to include the group, noting: “I guess from their perspective it’s in the interests of balance and impartiality.”

A visit to the WST Facebook page reveals a number of anti-trans cartoon strips  and links to articles filled with anti-trans rhetoric.

In one comment, the group argues “There is no hate is our activism, but if you prefer women to stay silent when they are told to believe that men can be women or that the contemporary, western trans movement wants to redefine what is a woman, then be prepared for some very strong opposition.”

Spokesperson Isla MacGregor has rejected any suggestion that WST is anti-trans, but said that she does not think “trans women are women.”

“The vast majority of women in our community want to maintain single sex services and facilities based on the biological reality that persons with male genitalia are not what women wish to be exposed to in single sex facilities,” she told ABC News.

Arguing that “we have to be considerate of multi-faith communities, some of which have got very strong restrictions on sharing spaces with male-bodied people,” she added: “What we don’t support is the sort of signage that Holly Ewin is providing.

“We would like to see a rotational poster supporting diversity in all its forms.”

Alderman Damon Thomas, who introduced the amendment for WST to be invited, called its inclusion “a no brainer.”

WST has previously butted heads with Ewin. On May 30, the group said that it would lodge a formal complaint against the councillor, alleging that they used the word Nazis when talking about them and shared a member’s mobile phone number online.