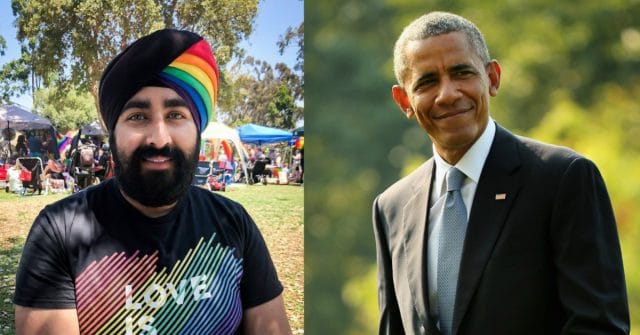 Barack Obama congratulated the bisexual brain scientist who wore a rainbow turban for Pride in a tweet on Tuesday (June 4).

The former US president tweeted Jiwandeep Kohli to thank him for his work towards equality, and to wish his followers a happy Pride.

Obama said: “You’ve got a lot to be proud of, Jiwandeep. Thanks for everything you do to make this country a little more equal. Turban looks great, by the way. Happy Pride Month, everybody!”

Barack Obama told Kohli he had a lot to be proud of. (Barack Obama/ Twitter)

Kohli replied to Obama to thank him for his support and offer him pastries.

He said: “I’m a fairly verbose person, but today I am lost for words. Thank you for your support and the complement, Mr. Obama. If I can ever repay them with pastries, please let me know!”

Many of Obama’s Twitter followers commented to make comparisons to Donald Trump’s attitude towards the LGBT+ community.

One follower said: “You are such a genuine and inspiring leader. I used to say ‘I miss Obama,’ and of course, I miss you in the White House. But I am so grateful for the continued example you set each and every day – just by being you. We need you now, perhaps, more than when you were in office.”

“It was nice to have a president who celebrated Americans of ALL backgrounds and faiths. America’s strength lies in its diversity and there’s nothing anybody can do to change or deemphasise this self-evident truth,” said another.

Sikh activist Simran Jeet Singh replied to the tweet: “President Obama sharing this story means so much to so many of us.”

Since Kohli originally posted the photo on Twitter on June 1 it has received 112,000 likes.