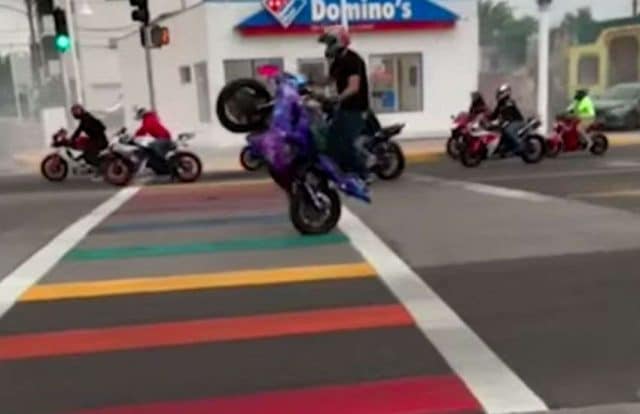 The US city of Albuquerque, , proudly unveiled a new rainbow crosswalk last Monday for Pride Month in the US.

However, the initiative has not pleased everyone.

Last Wednesday night, a group of people on motorbikes attempted to trash the Route 66 crossing by performing burnouts across it. As a result, black tire marks partially obscure some of the colored stripes.

Footage of the incident quickly appeared on social media.

Police are now hunting for the culprits.

‘To the vandals, I hope you got something out of it,’ said the New Mexico lawmaker. ‘But my message to you is, grow up. As an LGBT person, I do feel sad.

‘Little boys like that, who defaced that sidewalk, they’re never going to take our pride away.’

‘We as an organization and as a community, are appalled at the senseless acts of vandalism,’ it said in a .

‘Our organization stands to support and defend the rights of all individuals in our state, including the LGBTQI community and condemns the acts of vandalism witnessed on June 5th, 2019.’

The crosswalk cost the city of Albuquerque $30,000.

The crossing was unveiled ahead of Albuquerque Pride, which took place in the city Saturday.

At the time of writing, no arrests have been made.

‘The facts will determine the appropriate charges, including whether damages amount to misdemeanor or felony charges,’ saud Albuquerque police spokesman Gilbert Gallegos on Thursday.

‘City crews attempted to clean the crosswalks today. It is not yet clear whether some portions will need to be re-striped.’

GSN has reached out to Albuquerque Police for further comment.