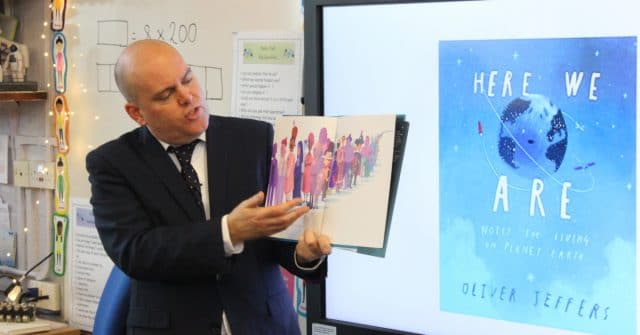 Andrew Moffat, the teacher whose LGBT+ inclusive education programme sparked a wave of protests outside a primary school, has said he is receiving counselling.

Moffat is the assistant headteacher at Birmingham’s Parkfield Community School, which has faced a wave of high-profile anti-LGBT protests over his No Outsiders anti-bullying scheme.

In an interview with the Huffington Post, he spoke about the impact of the demonstrations.

“The school has paid for a counsellor for me, which is fantastic. I see him once a week. He has been really, really good,” he said.

“And also the staff team are so solid in that school. Every week I’m at a different school around the UK doing an Outsiders day and schools are lapping it up because it works.”

He added that although they are facing challenges at the school, there are many others benefitting from the programme.

“There are many hundreds of other schools who are not facing challenges, so we carry on. The kids love No Outsiders. Kids are very confident about what No Outsiders means,” he added.

Earlier this year, the primary school suspended its No Outsiders programme, which teaches children about diversity and inclusion, following widespread protests from parents.

Protestors demonstrate against the No Outsiders programme, which teaches children about LGBT rights, at Parkfield Community School. (Christopher Furlong/Getty)

Some protestors claimed Moffat was promoting his own “personal beliefs” but Ofsted has ruled that there is “no evidence” to support criticism of the programme.

“I want children to be proud of who they are. And I think all parents want that for their children. It’s an anti-bullying resource. No parent wants their child to be bullied.”

Last week, Conservative MP Esther McVey waded into the row on LGBT-inclusive education in Birmingham schools, as she set out her manifesto for the Conservative party leadership.

The Tory MP is one of 11 MPs vying to become party leader and consequently Britain’s next prime minister.

Speaking to Sky News on Thursday morning (May 30), she said that teaching young children about LGBT relationships is a matter for parents.

“I believe parents know best for their children,” she said. “While they’re still children—and we’re talking primary school [age]—then parents need to have the final say.