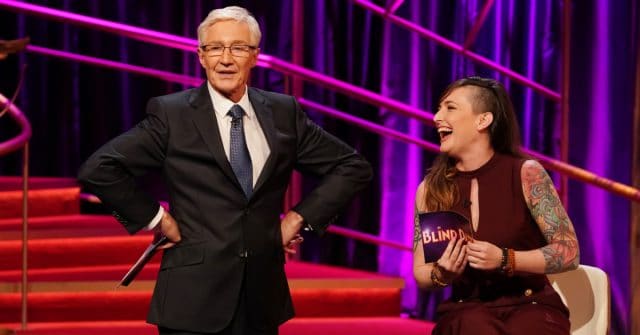 This week’s episode of Blind Date will feature the show’s second-ever lesbian contestant and she wants to show that lesbians “can be a laugh, too.”

In the four seasons and 31 episodes so far since the show’s revival in 2017 there have been three same-sex male couples and only one lesbian match.

But Angela Heenan, 37, from Manchester tells PinkNews that this is exactly the reason she applied to be on the show. Heenan will pick between three potential dates on Sunday’s episode (June 9) on Channel 5.

She said: “I wouldn’t have applied for any other dating show, but I grew up with the original Blind Date with Cilla Black.

“They usually go for gay men on these shows because everyone loves a gay man. They’re funny and cool, women love them. I don’t think lesbians have that, the way society looks at gay men. No one says: ‘Oh my god, you’re a lesbian!’ Lesbians don’t have that image.”

Heenan said lesbians need visibility on TV and that they need to be focused on more, rather than being minor characters in soaps or reality TV.

“I’m a lesbian but I’m just me, I’m a bit different. Hopefully people will see that lesbians are quite a laugh, too, really! They’re just people.”

On Sunday, Heenan will have her pick of football coach Kitty, community nurse and burlesque dancer Sam and mental health nurse Naomi.

Heenan, a comedy and character actor, said she thinks the producers picked women who would match well with her “bonkers” personality.

Her job, as she describes it, is being a “professional lunatic.” It involves children’s theatre, character acting for immersive theatre and murder mystery nights, and she is even a maze master for The Crystal Maze live experience in Manchester.

Heenan describes herself as “high energy” and very optimistic, rather than “glass half full” she said she is “glass flowing over.”

Another reason she said she pickedBlind Date to find love was that “no one shy or timid would put themselves forward.”

“I’m dreading watching because I’m quite high energy,” she said. “I talk a lot and I think I’m really funny, I know what I’m like.”

The entertainer said that her family thought her going on the show was “brilliant and hilarious” and that her mum was “absolutely beside herself.”

Angela Heenan will have her pick of three women on Sunday’s Blind Date. (Channel 5)

“My mum asked me: ‘You didn’t say anything too embarrassing, did you?,’” said Keenan. “I told her there were lots of sexual innuendos but she said that she knew what the show was like. She just really wants me to meet someone.

“I can tell her that I’ve got a good job, or anything else, but she’ll just say: ‘Yeah, but have you met anyone?’ She thinks it’s the be all and end all of life to meet someone.”

Heenan said she was comfortable with the “cheesy, tongue-in-cheek” and innuendo-heavy style of the show, but some of the questions scripted for her to ask her blind dates were a bit much even for her.

One of the questions she asks her dates is: “I like bringing women back to my house to show them my pet lizard – what would you show me if I came back to yours?”

“I wish I did,” Heenan laughs. “Imagine! Luring them back to see my lizard… I asked if I could say I show them my telescope so we can look at the moon, but they said no.”

Heenan won’t say who she picked, but she said when the screen went back she was “pleasantly surprised.”

“My face looked like I’d won a prize! It’s a human lady and I look like I’ve won a cake or something. But she was exactly my type.”

Blind Date airs on Sunday at 8pm on Channel 5.