Home Gay Life Border Patrol agents humiliated an immigrant by forcing him to hold a... 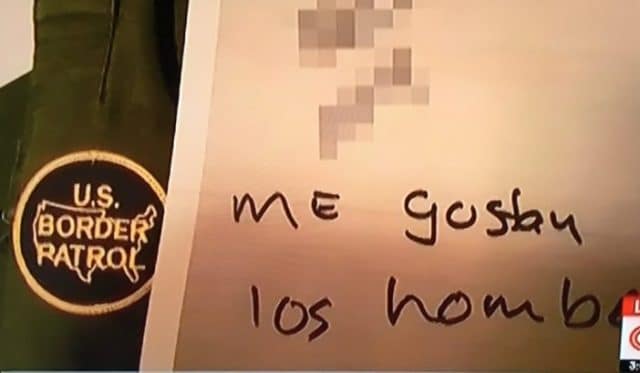 Border Patrol agents laughed at a male immigrant being held at a processing center in Texas who was forced to walk around with a sign that said, “I like men.”

According to emails sent by an agent who witnessed the incident, a Honduran man was paraded around the El Paso Processing Center in front of other migrants while holding a sign that said, “Me gustan los hombres,” which means “I like men” in Spanish.

In an attempt to humiliate a Honduran man, border patrol agents forced him to carry around this sign that translates to ‘I like men’.

The agent who sent the emails said that he confronted the agent who wrote the sign and another who was laughing. The Honduran man was upset, according to the witness, who took away the sign and gave him another.

The emails say that seven other agents witnessed the incident, which happened in March, and that a senior agent did nothing.

“I am forwarding to the Office of Professional Responsibility, the office charged with looking into these allegations,” a Customs and Border Patrol official told CNN when asked about it.

Many of the migrants from Central America arriving in the U.S. seeking asylum are LGBTQ people escaping transphobic and homophobic violence in their home countries.

This story comes a week after Pro Publica reported on a Facebook group of Border Patrol agents where they joked about immigrants dying and used racist slurs to refer to “subhuman” immigrants.