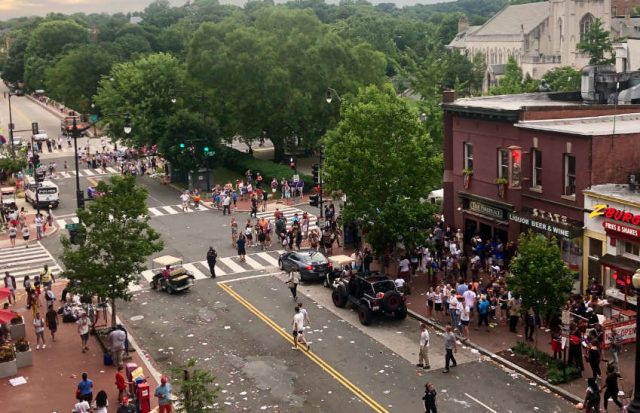 Several people have been injured in Capital Pride after fleeing noises which were mistaken for gunshots.

Attendees were startled after several loud ‘popping’ noises were heard at the Pride parade in central Washington DC.

A number of people at the event were injured when the crowd started running away from the noises.

Police said they were called to the scene amid reports of a man with a gun.

When they arrived people were fleeing the area and reported hearing gunfire.

A male suspect has been arrested on suspicion of gun possession. A gun was found nearby the suspect.

However, authorities said there was no evidence that any shots were fired. Police are investigating the cause of the noise.

A number of attendees were admitted to hospital with minor injuries following the incident.

Videos have emerged which appear to show parade attendees pushing down metal barricades while fleeing the noises.

People interviewed at the scene have said that what they first thought to be gunfire could have been banging noises from barricades hitting the ground.

The Capital Pride website said over 200 people were expected to take part in the parade on Saturday (8 June).

This includes marchers and floats taking part in the 1.5-mile long parade route.

Capital Pride organizers tweeted that the parade had been called off following the incident.

Despite this, they said that the X would be going ahead as scheduled.

Although the authorities have said no shots had been fired at Capital Pride, the US continues to experience mass shootings at shockingly routine rate.

Earlier this week, 12 people were shot dead in a mass shooting at Virginia Beach.

The events have seen widespread calls for increased legislation on gun ownership in the US.

Despite polls finding widespread public support for increased legislation on firearms, policies have often failed to pass due to political obstacles.