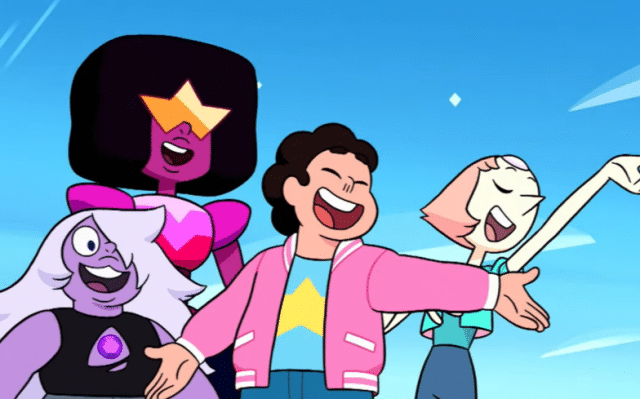 Cartoon Network has released the first trailer for the upcoming Steven Universe film. The trailer was unveiled at the San Diego Comic Con, where it was revealed to be a feature-length musical.

The series has a long history of LGBTQ representation, and many of its characters are genderless, albeit female presenting. The series has also featured same-sex relationships, and a same-sex wedding, which saw it win praise from GLAAD and win a GLAAD Media Award for Outstanding Kids & Family Program.

Although the trailer doesn’t have any explicit LGBTQ moments, it does feature LGBTQ characters Pearl and Garnet. The cast list also has Ruby and Sapphire, whose love caused them to combine into Garnet.

The film will see Steven, alongside the gems Garnet, Pearl and Amethyst attempt to live their lives peacefully following the events of the fifth season. However, a new Gem invades Earth with the intention of destroying all organic life, and the heroes have to stop her within 48 hours.

And following the conclusion of the film, a one-hour documentary will be broadcast showing behind-the-scenes footage of how the film was created.

Watch the trailer for the film below:

The series creator, Rebecca Sugar, who identifies as a non-binary woman, urged fans to watch the film, saying: “Please tune in September 2nd for Steven Universe the Movie! Working on this has been a life changing experience. Please don’t miss it… please watch it with friends.”