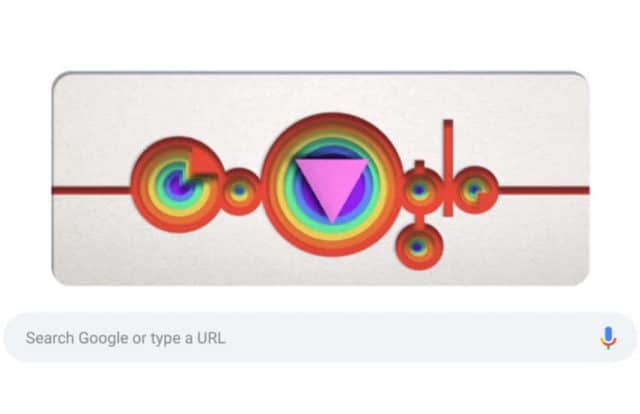 The homepage of the hugely popular internet search engine features a rainbow logo with an upside down pink triangle in the middle.

The pink triangle’s history started during World War II, when the Nazis forced gay people to wear it on their prison uniforms.

Since then, LGBTI activists have reclaimed the symbol has one of unity and pride.

At the bottom of the Google homepage, there’s also a link to a video that explains the history of Stonewall.

’50 years ago,’ the video starts. ‘In a tiny bar called the Stonewall Inn, LGBTQ people fought back against years of oppression.’

It then added: ‘Today, this history lives on around the world.’

The video combines early footage of the Stonewall riots and the activism that followed in the years proceeding, with small moments like holding your partner’s hand and kissing in public.

It also features a speech from former President Barack Obama, explaining a national monument to the Stonewall Inn.

Google announced plans to digitize archival materials from the early days of the LGBTI movement.

It’s not the first time the Google Doodle has shown a nod to LGBTI history.

In May last year, it featured .

Born in Warsaw, she painted during the 1920s and 30s, primarily in France and the United States. Between World War I and II, she was active in the Paris art scene.

After World War II broke out in Europe in 1939, however, she moved to the US with her husband.

In 1974, she moved to Mexico, where she ultimately died in 1980 at the age of 81. Her ashes were scattered over the Popocatépetl volcano.

Lempicka had relationships with both men and women during her life. Many, naturally, considered it scandalous for the time.