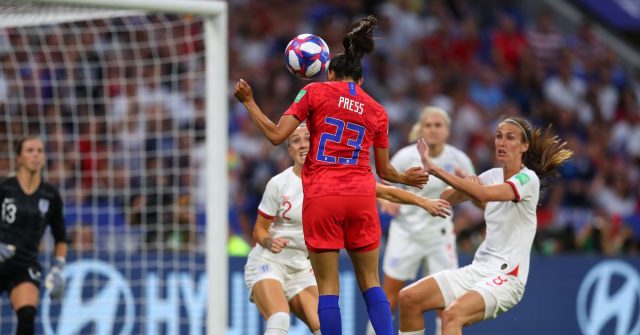 The U.S. Women’s National Team is taking on England in the Women’s World Cup semifinal without Megan Rapinoe on the pitch.

The out star player who has scored all four U.S. goals in the knockout rounds and has five in the tournament, is on the sidelines while Christen Press plays in her place. But in the 9th minute of action, Press showed her worth by scoring the USA’s first goal of the match.

USA Today reports U.S. Soccer did not explain the stunning change, other than to say it was not for disciplinary reasons. Rapinoe took part in warm-ups but was last out and spent part of the time on the sidelines, watching her teammates.

I’m guessing she has a minor knock and Ellis doesn’t want to reveal anything ahead of a second-half arrival. Just speculating …

Some are speculating she has a hamstring injury. Others say it’s a tactical move to bring her in, fresh, when needed later in the match.

We’re watching with you on FOX in the U.S. and you can follow along on @outsports Twitter and with our partners at All For XI in their open thread.