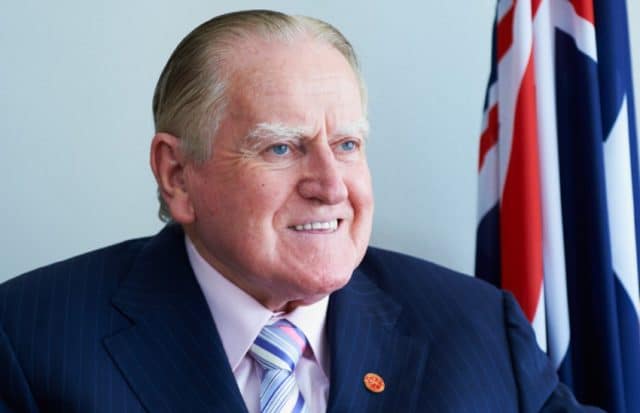 A Christian minister who has long campaigned against Australia’s LGBTI community has warned marriage equality would lead to seperate citizenships for gay people.

Fred Nile is a minister and New South Wales state politician for the Christian Democratic Party.

He is also a long-standing opponent of LGBTI people. Since the 1980s he has prayed for rain to stop the Sydney Gay and Lesbian Mardi Gras parade going ahead.

But the announcement that Seattle rapper Macklemore would be perform his pro-marriage equality song Same Love at the NRL Grand Final was too much for Nile.

He could not believe gay people have an ‘anthem’ – let’s face it we have more than one – and it would divide Australia. Nile argued having gay anthems would lead to the LGBTI community wanting ‘homosexual citizenships’.

‘The homosexual lobby has its own Olympics, its own award ceremonies in the cultural arena, its own flag, and now we are told they will have their own ‘anthem’,’ Nile said.

‘What next? Are they going to start handing out their own separate homosexual citizenships? Who is doing the dividing here?’

The Reverend warned Australia would follow in the footsteps of the United States if it continued to allow sport to become politicized. Nile argued the Colin Kaepernick led refusal to stand for the national anthem during NFL games in the US led to people ‘leaving the stadium in droves’.

‘Have the geniuses in the NRL not learned from the experience in the United States? The radicals in America are also politicising their sports, with disastrous effects,’ Nile said.

‘The poison of identity politics is ripping our society apart. And this poison is being peddled by the ‘Yes’ extremists who are hell bent on putting Australian against Australian. This is not acceptable, whatever your opinion might be.’

But what would our anthem be?

Rather than be outraged by Nile’s comments, Australia’s LGBTI community took to Twitter to debate what the gay anthem would be. There was also a lot of debate about the name of the gay republic’s capital.

Fred Nile is worried gays are going to make their own country where we can do what we want and get away with it.
Sort of like the Vatican?

Our teachers will be Gaga, P!nk and Christina Aguilera

this is sickening and offensive. unacceptable. fred nile is so backwards……….the anthem would be carly rae jepsen, not macklemore https://t.co/Qy0FcaHDPb