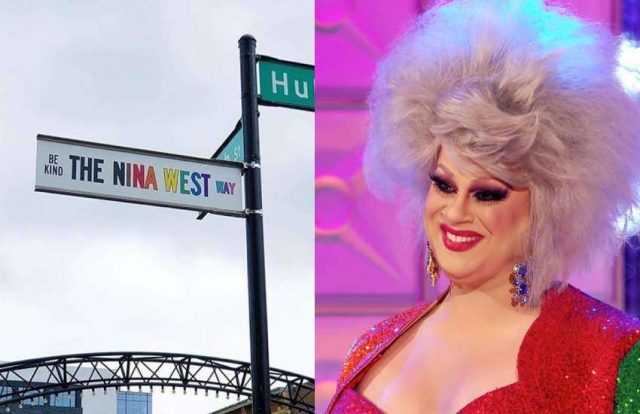 Nina West, one of the most beloved queens of season 11 of RuPaul’s Drag Race has gotten a street in her name.

A street in Columbus, Ohio, has been named after American queen, whose real name is Andrew West.

She placed sixth and won Miss Congeniality, the title awarded to the queens whom the fans experienced as the kindest.

She posted a shot of the street sign reading ‘Be Kind The Nina West Way’ in rainbow colors, a shoutout to her motto ‘Go Big, Be Kind, Go West’.

‘Thank you to my fair city of Columbus for the honor of naming a street in my honor. “Be Kind THE NINA WEST Way” – i am speechless.’

She furthermore added: ‘I am so humbled. I am beyond proud to represent a city that has taught me so many invaluable lessons and allowed me to grow and be the best I can be. I am so in love with you, CBUS. Forever and always, and so proud to call you HOME. Huge thank to the Team Nina West group on Facebook who helped make this happen. I really don’t have words.’

Last month, Nina West released her first music video off her . Drag Is Magic features songs like The Drag Alphabet, The Reading Song and What Makes Us Shine.

The video for Drag Is Magic features the drag queen sharing secrets on how to be a great drag performer with adorable kids. Spoiler: there’s no secret but being your most unapologetic self.

West told  she hopes young fans will be inspired to ‘dream big, be kind, and be their perfect selves’ when they listen to the EP.

West appears both as a nanny and as her diva self as she explains what drag really is. The video concludes as each child embodies their own fantasy self.