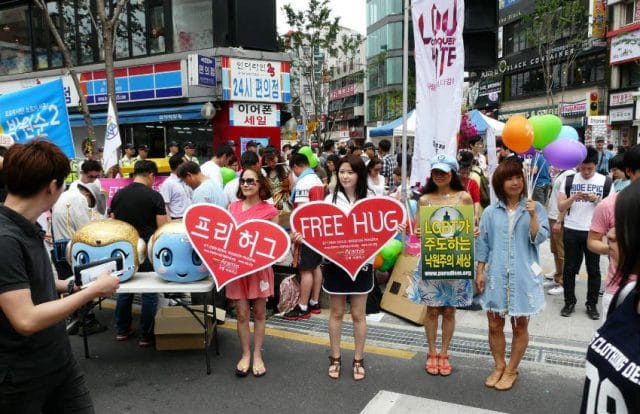 A court in the capital of South Korea, Seoul on Thursday (30 May) rejected an application by conservative Christian groups to stop the annual LGBTI pride event this weekend.

Anti-LGBTI groups had argued the 20th Seoul Queer Culture Festival (SQCF) would be harmful to children and infringed on their rights.

The court said people were free not to attend the rally so their rights were not infringed.

A judge vowed to protect freedom of expression and assembly.

Meanwhile, the judge said it was difficult to conclude that the event would be harmful to children or teenagers attending.

Earlier this month, authorities dropped an investigation into violence at a rally in Incheon.

Anti-LGBT groups on Thursday were already setting up for their counter-demonstration at Seoul Plaza.

There is also currently no discrimination legislation to protect LGBTI Koreans. Same-sex marriage is not legal.

The country’s LGBTI movement has triggered a , HRW warned.

Christian and anti-LGBTI protesters have disrupted pride events across the country in the last year.

Organizers and witnesses of the Incheon Queer Culture Festival (IQCF) say about 1,000 anti-LGBTI and Christian demonstrators verbally and physically abused attendees of a march in September last year.

Incheon city officials had denied the queer festival’s request to host the event, citing a lack of parking. Organizers, therefore, lodged an appeal and vowed to march anyway.

In Busan, it took to keep a pride event violence-free.

In Jeju, about 50 demonstrators held placards, grabbed LGBTI attendees, and lay down on the street to prevent the pride march, according to attendees.