Home Gay Life Cristiano Ronaldo Had Sex With Men On His Yacht. Rumours or truth?... 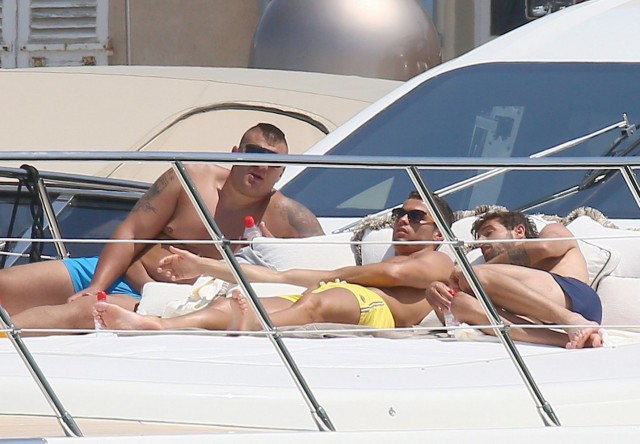 Recently before the begging of the 2016 European Championship, football star of Real Madrid Cristiano Ronaldo has been having a rest and relaxing in Ibiza. And he wasn’t alone there. He was accompanied by his friends – some very hunky guys as Ronaldo is.

German newspaper Bild suggested that hunky footballer might not only enjoy sun, sea and fresh air but also hang out with some hunky strong guys with muscled bodies.

Ronaldo posted a joint photo of this crew on his Instagram account and signed it: Dream team!

The German newspaper draw attention of its readers to the fact of Ronaldo’s sexual orientation showing him surrounded with just muscled men.

The newspaper article said: “On the boat there is absolute woman doldrums – rather, the boys sizzle among themselves.”

And a photo was signed with the following words: “Women? Wrong! Captain Ronaldo and his guys are self-sufficient.”

Maybe you can remember that last year, when a French sports reporter suggested that football star was dating Moroccan kickboxer Badr Hari.

But what is the reason of such constant suspicions of Ronaldo being gay? His hunky apperance? Or maybe these aren’t suspicions at all? Who knows!?