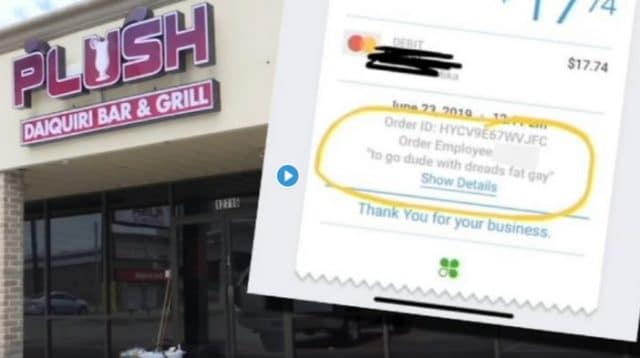 A customer says he won’t go back to a restaurant in Texas after a server described him as “fat” and “gay” on the receipt.

The customer, who hasn’t been identified, told KTRK that he was confused and angry when he saw that “to go dude with dreads, fat, gay” was written on his receipt after spending a few hours at the Plush Daiquiri Bar and Grill in Houston.

“That’s like stereotyping, for her to not even know and say fat, gay and this and that,” he said.

The customer called the restaurant to complain, and one of the owners said that it was just the server’s way of identifying the customer.

“It was just her way of describing him,” said co-owner Marcus Barlow. “It wasn’t anything against him or anything personal. It was her way of referencing back who to deliver the food to.”

Barlow said that he disciplined the server and she has been suspended for three days.

“She was unaware that he could see it and she was very apologetic to us about it and she was disciplined,” said the other co-owner, Leighton Dickson. “We do no discriminating at all at Plush.”

The customer said that he won’t be going back.

“If anybody asked about it I would tell them, it’s a good restaurant. I have nothing bad to say about the restaurant. I just will not go back,” he said.