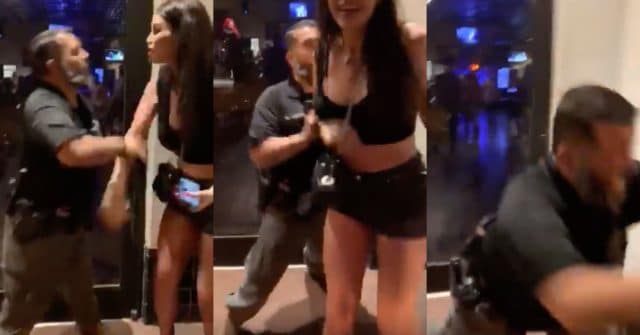 A manager at a LGBT bar in Dallas, Texas have been fired after a transgender woman was refused service and forcibly removed from the venue.

JR’s Bar & Grill confirmed on Thursday (June 6) that a staff member had been terminated after video footage of a security guard confronting a trans woman was shared on social media.

Daniel Heredia posted two clips to Facebook, accusing the bar manager of refusing to serve his friend Blair Jirousek because she is trans.

“We came to JR’s to support some of the local queens we are both very familiar and friendly with,” Heredia wrote.

“Blair walked over to the front bar to order herself a drink. Right away the manager, Carter, asked for all three of our IDs. He grabbed Blair’s and studied it doing the most, handing it back and saying he wouldn’t serve us.”

“When we asked for an explanation he wouldn’t give us one.”

Heredia said that Jirousek, 23, has not yet been able to update her ID with the correct name and gender marker, but noted that all of her cards carry the same name.

“We tried explaining that and Carter had no interest in even trying to listen. It all felt like it stemmed from transphobia. He wouldn’t look at Blair or even treat her like a person.”

Heredia said that the group then left the bar, returning later on to watch the drag show. When another friend walked in, he was reportedly told: “I’m not going to serve you because you’re friends with her.”

“Then Carter proceeds to call security over to escort us out when we had just been minding our own business,” he continued.

“The security guard M. Lozano came over and also would not give us a single reason as to why we were getting kicked out.

“We told him we thought it had to do with Blair’s ID and gave it to verify that it was not a fake.

“After he studied it thoroughly his reaction changed because he knew it was real but his exact words were: ‘The manager said you have to leave.’”

Heredia goes on to accuse the security guard of “putting his hands on Blair, even shoving her so far she fell to the ground.”

A brief video appears to show Lozano repeatedly pushing Jirousek away from the establishment as she tells him: “You’re not allowed to touch me.”

Local news outlets reported that the manager has been fired for his part in the confrontation.

The bar’s owners said in a statement: “After reviewing the situation and gathering statements from the parties involved, the company has chosen to terminate the employee in question effective immediately.

“We are against discrimination of any kind, and work diligently with all employees to ensure that our bar is a welcoming space for everyone to celebrate. We respect and value people from all communities and will continue to advocate for diversity and inclusivity.”

In January 2017, the manager of a JR’s Bar in Washington, DC denied he was racist after a leaked email showed him requesting the a black model be replaced with a “hot white guy.”