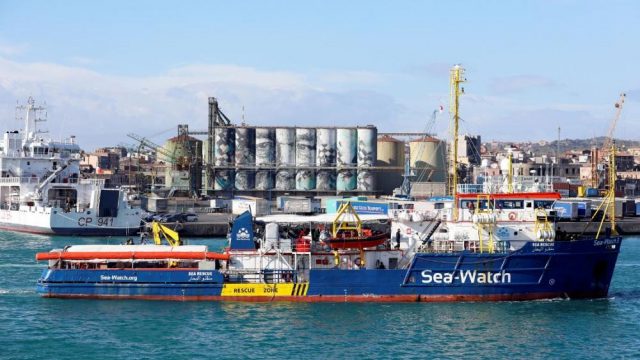 Migrant rescue ship Sea-Watch 3 has decided to enter Italian waters, the vessels’ crew said on Twitter on Wednesday (26 June), defying an order from authorities in Rome to stay out.

The German charity boat had been stranded at sea for two weeks with 42 rescued migrants on board.

“I have decided to enter the port of Lampedusa. I know what I’m risking, but the 42 rescued are exhausted. I’m bringing them to safety now,” the ship’s captain said.

“The EU has let them down for 14 days. Our captain has no choice,” the NGO added.

Italy’s Interior Minister Matteo Salvini promptly took to Facebook and reacted to the announcement in a post.

“We will use every legal means to end this shameful situation. The laws of a state must be respected,” Salvini said.

“A Dutch ship from a German NGO that ignores Italian laws? It’s a joke,” he continued.

“The Dutch and German governments will answer for it. I’m fed up with it,” the far-right politician told his Facebook followers in a live video.

Salvini continued his rant on Twitter: “Europe? Absent as always,” he said.

According to a decree approved in June, the Italian Interior Ministry has the power to deny access to its territorial waters when it considers vessels are a risk to security or public order.

In cases where the boat still enters Italian territorial waters, the decree states that the vessel will be seized and the captain will face criminal charges.

The move from Sea-Watch 3 followed a ruling by the European Court of Human Rights against the migrant rescue ship after it appealed for an emergency decree to allow migrants stranded on the vessel to disembark in Italy.

But the European Court of Human Rights did indicate that Italian authorities must continue to provide all necessary assistance to vulnerable people on board the ship.

The Dutch rescue ship Sea-Watch 3 is owned by a German charity and has been waiting for somewhere to dock since rescuing 53 people in international waters in the Libyan Search and Rescue Region.

Following an onboard health inspection on 15 June, ten migrants were permitted to disembark in Italy, including three families with underage children and pregnant women. Another individual was allowed to leave on the night of 21-22 June for health reasons.

“No exceptionally serious and urgent reasons”

This week, the charity appealed to the European Court of Human Rights to allow the Sea-Watch 3 ship to disembark in Italy as an “interim measure” to “prevent serious and irremediable violations of human rights”.

But the court found that these interim measures should “apply only where there is an imminent risk of irreparable harm”.

“Sea-Watch 3 had not indicated that other individuals from vulnerable categories were on the ship. In consequence, [the judge] considered that there were no exceptionally serious and urgent reasons justifying the application of the urgent measures.”

In a statement to Euronews, Sea Watch confirmed that “there are still 42 rescued people on board, including three unaccompanied minors, the youngest [is] 12 years old.” Those on board are believed to be from a number of African countries, including Niger, Guinea, Cameroon, Mali, Ghana and the Ivory Coast.

Euronews has reached out to Sea Watch for further comment on the latest decision.

Tuesday’s ruling is likely to be criticised by a number of organisations, including some in Lampedusa — one of the Pelagie Islands, in the Mediterranean Sea, southern Italy.

Activists and representatives of the Mediterranean Hope Association and the Lampedusa Solidarity Forum have been sleeping outside a parish church in solidarity with those on board Sea-Watch 3, using the motto “You are not alone”.

“We’ve been doing this for 7 days and we will not stop until they disembark.”

Italy has taken a hard line against migrant rescue ships since Mr Salvini took office in June 2018. The Italian Interior Minister has previously commented that the Netherlands should be responsible for migrants onboard a rescue ship flying under the Dutch flag.

Since Italy tightened its rules on migration, Malta has spearheaded EU efforts to share migrants rescued in the Mediterranean Sea. On Sunday, a group of 37 arrived in the island’s capital Valletta.