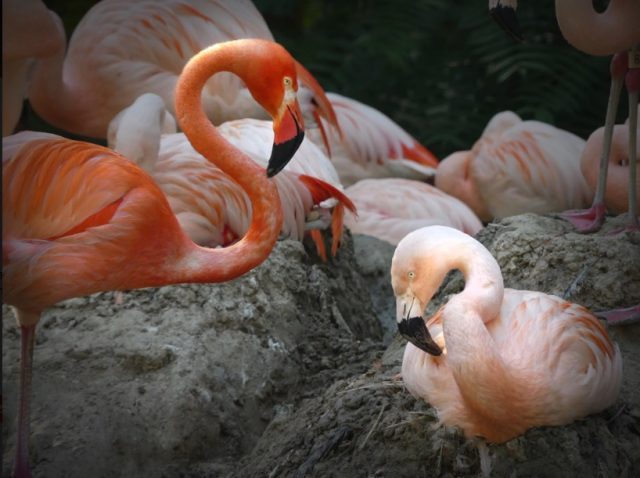 Despite their differences — Lance is a Chilean flamingo and Freddie is an American flamingo — the two male birds have kept up a steady romance for several years at the Colorado zoo.

Although the pair can’t produce offspring of their own, zookeepers said they could step in as surrogate parents if another breeding pair is unable to raise their chick.

The zoo shared the flamingos with the world in a tweet posted a few days before the city celebrates Pride on June 16 and 17, adding the hashtag #Pride to proclaim their support.

<p dir=«ltr» lang=«en» xml:lang=«en»>Chilean flamingo Lance Bass and American flamingo Freddie Mercury have paired up for several years. While these two males won’t be able to have a chick of their own, they are able to act as surrogate parents if a breeding pair is unable to raise their chick. #Pride pic.twitter.com/YEyvIRkomF

The *NSYNC star Lance Bass was delighted to learn of his gay flamingo namesake, commenting on Facebook: “This is the best!!! I hope Lance is the one w the frosted tips!!”

He also tweeted: “Best story of the day!”

Flamingo Lance and Freddie’s relationship may sound unique but there are plenty of queer couples in the animal kingdom.

They aren’t even the first LGBT+ flamingo couple — the UK has its own gay flamingo romance in the form of Carlos and Fernando, a same-sex pair at the Slimbridge Wildfowl and Wetlands Trust in Gloucestershire.

The two birds have raised chicks together after they stole eggs from a neighbouring straight couple, and can even feed the newborns with a kind of ‘milk’ they create in their throats.

Two lesbian penguins are living happily at a New Zealand zoo and have also raised a chick together; meanwhile at an Irish aquarium more than half the penguins are reportedly in same-sex relationships.

Last year the Artis Zoo in Amsterdam celebrated Pride with a special one-hour guided tour focusing on homosexuality in the animal kingdom.

The zoo’s resident biologist Charlotte Vermeulen said in a press release: “Nature is much more diverse in sexuality and sex than most people think.

“Since homosexual animals do not reproduce, this behaviour may seem like an evolutionary paradox. But there are already 1,500 species of birds and mammals in which homosexual behaviour has been observed, both between males and females. Homosexual and lesbian behaviour among animals is no error. In many animal species it is part of their normal, species-specific behaviour in nature.”