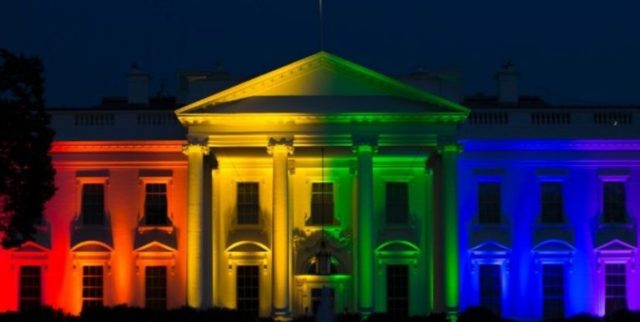 Linda Harvey, the president of Christian right group Mission: America, is at it again with her absurd statements. This time she’s actually claimed that the rainbow has been “raped” by homosexuals and Christians should therefore trademark it.

There’s no misinterpreting her: she wrote this herself in an article for World Net Daily. Harvey seems to hate the fact that the rainbow is an adopted and widely recognized symbol of the LGBT community.

Pride Month has clearly upset Harvey, as has “McDonald’s selling French fries in rainbow containers”, Amazon’s rainbow apparel collection and Target and Walmart’s cashing in on the gay rainbow.

Here are some excerpts from Harvey’s article:

The sweet rainbow image has been violated, raped by the deluded and fraudulent, and it now serves too often as a garish signpost for slavery to grave homosexual sin.
It’s clear God did not intend for the rainbow to represent rebellion, iniquity and division. So how did this precious symbol become the banner, with few objections, for human depravity, lust, defiance and heresy?

Rainbow flags are flown in America from some government buildings, at some of our embassies, and these colors on several occasions even lit up our White House (under the former regime, thank God). From shameful pride parades to hats, T-shirts, wristbands and buttons sold at Target or Walmart, sexual deviance is being colorfully and arrogantly proclaimed from America’s rooftops.

Well, I’m offended by the rainbows hung all over Columbus, Ohio, every June for “pride” month, as this beautiful image morphs into a brand identity for perversion. I feel excluded because the depraved have taken the Lord’s glorious sign of hope and corrupted it. Why shouldn’t I sue?

I wonder if perhaps it’s time for believers to claim the rainbow again, by legal means if we could.

Can we trademark the rainbow? Of course, it’s probably impossible and perhaps even inappropriate.

And those are only a few excerpts. The article itself is incredibly lengthy.

Rainbows should accompany what God would smile on. God is not smiling on homosexual conduct, gender defiance or the corruption of children, and He never will.
An appropriate rainbow for the “LGBTQ” sin identity front would look very different, featuring colors like brown, puce, mauve, gray and black – lots and lots of black.

The rainbow’s current use by sexual anarchists turns hope into a license for sin. Rainbow-adorned clergy? You are in for some hot eternal times, unless repentance comes along soon.

Gyrating, Speedo-wearing sado-masochists on rainbow-decorated “pride” floats? Look out for what’s coming, unless you bow before the King of Kings.

Harvey’s are some of the most hurtful words I’ve read about the LGBT community for quite some time, and that says a lot. She speaks of being worried about the “corruption of children”, but I only hope most of our LGBT children won’t come across her words (“most” because unfortunately some will).

Surely, however, we’ll be reading about similar statements from Harvey shortly.