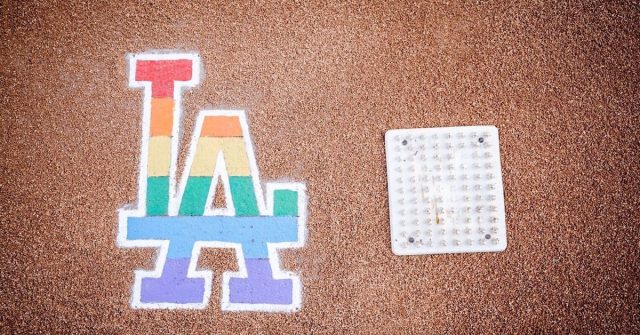 The Los Angeles Dodgers did up LGBT Pride Night to the nines Friday, with a rainbow-colored “LA” on the mound and Pride flags flying at Dodger Stadium.

”For the first time ever at Dodger Stadium, the LGBT flag flies alongside the American flags,” the Dodgers tweeted prior to the game with the Philadelphia Phillies.

For the first time ever at Dodger Stadium, the LGBT flag flies alongside the American flags. #LGBTNight pic.twitter.com/MOm0Vlitb0

Tennis legend and LGBT icon Billie Jean King, a part owner of the team, said she “couldn’t be more proud of the welcoming, inclusive space the Dodgers are creating for all their fans.”

Pride Night at Dodger Stadium! Couldn’t be more proud of the welcoming, inclusive space the @Dodgers are creating for all their fans ️‍ #LGBTNight #EqualityForAll #GoDodgers pic.twitter.com/QerUHP6hKc

Also on hand were Billy Bean, an MLB executive and former Dodger who is gay, out singer Melissa Etheridge and the cast of “Queer Eye.” The Varsity Gay League played a pre-game kickball match.

The Dodgers are one of 28 of the 30 MLB teams to have a Pride game this year, but theirs is one of the most comprehensive, with an estimated 10,000 tickets sold for the promotion. A lot of that owes to people like Dodgers’ Senior Vice President of Marketing, Communications and Broadcasting Erik Braverman, himself openly gay.

(This story will be updated).